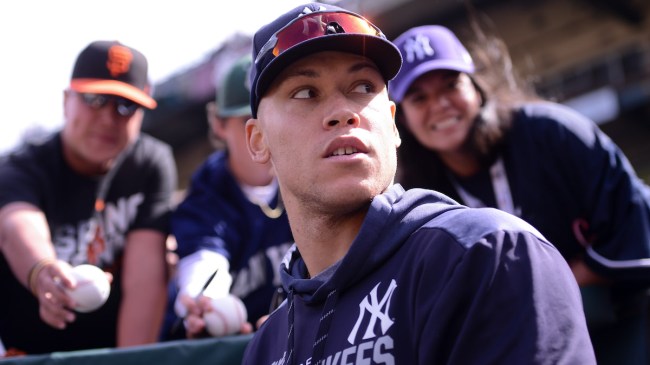 The Aaron Judge sweepstakes are underway and one Bay Area business owner is doing everything he can to help convince the reigning AL MVP to join the San Francisco Giants.

Judge is currently exploring his options in free agency coming off a historic season with the New York Yankees. After turning down a 7-year, $213.5 million contract extension before the 2022 season, he is now expected to sign a long-term deal worth over $300 million.

The Giants are among the favorites to land the star slugger. The Yankees and Dodgers also remain in the mix, but a potential return home for the NorCal native made headlines when he was spotted in San Francisco on Monday evening.

While Judge already has plenty of reasons to join the Giants, one popular Bay Area sandwich shop is offering some extra incentives to sweeten the deal.

Yo @TheJudge44 , I’ll throw in FREE @ikessandwiches FOR LIFE & the naming rights to one sandwich to whatever the @SFGiants are offering.

Ike Shehadeh, the founder of Ike’s Love and Sandwiches, is offering Judge free sandwiches for life AND the naming rights to his very own sandwich. All Judge needs to do is sign with the Giants.

It’s an outside-of-the-box pitch, but not one to take lightly. The combination of Dutch Crunch bread and secret sauces in a variety of delicious sandwiches can make for quite a convincing argument. Anyone who has tried Ike’s, myself included, could tell you how incredible their sandwiches are.

Shehadeh added that the offer would still stand if Judge were to join the Oakland A’s. However, it would be a very different story should he decide on joining the Giants’ SoCal rivals instead.

As part of the offer, Judge would also join Hunter Pence, Madison Bumgarner, Matt Cain, and Barry Bonds on the Ike’s Sandwiches menu—all of which have become customer favorites.

While it’s not a multi-million dollar contract, it’s likely the most unique offer Judge has on the table. After the Giants missed the playoffs last season, fans are pulling out all the stops to improve the team’s lineup.

Judge has a tough decision ahead and Ike hasn’t made it any easier. But Giants fans could have both a new slugger and sandwich if things work out in the coming months.