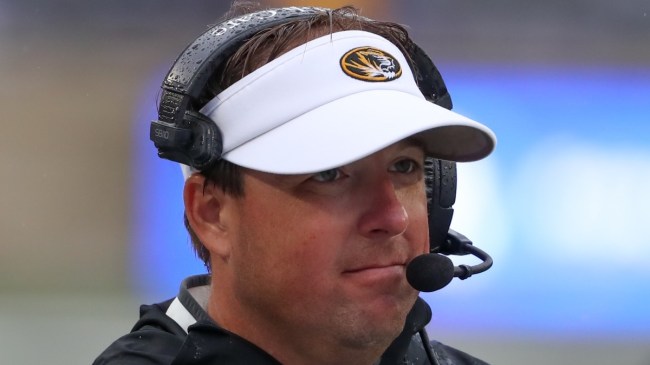 They say that weird stuff can happen at Jordan-Hare Stadium, home of the Auburn Tigers. From the kick-six to the Prayer at Jordan-Hare, odd things seem to happen to Auburn’s opponents at home. But, I’ve seen nothing like what happened to the Missouri Tigers today.

Missouri Blew The Game Twice When They Looked Sure To Win

It was one of the wildest finishes to a game in college football history. First, Auburn was in field goal range, but elected to go for it on a 4th and 1 with a minute-and-a-half left.

RGIII: "I like this, as long as you don't hand it to Tank Bigsby."

Auburn: Hands it to Tank Bigsby, immediately stuffed in the backfield.

I'm not even sure Bryan Harsin wants this job anymore pic.twitter.com/HsxnMxIBgO

So, Mizzou drives down the field and they get inside the ten. They smartly waste time to give themselves an easy field goal attempt to win the game and get an SEC road win. Until…

That kicker, Harrison Mevis, was an All-American last year and considered one of the best in America.

Not to worry. Missouri held Auburn to a field goal and the Tigers just needed a touchdown to win the game. And then…

The Auburn-Missouri game is drunk

Watching this live, my brain just made an assumption that he ran in, like a suggested formula in Microsoft Excel. It wasn’t until a few seconds afterward where I realized that he fumbled. That is the single worst way to lose a game I’ve ever seen. Every other player on the roster had that game won twice. Mevis and Nathaniel Peat straight-up lost that game for the Mizzou and Mizzou bettors everywhere.

This is why we love college football. Not necessarily because of the big games, but because of the dumb stuff that happens like this all across the country every Saturday.

If football were truly fair, Mizzou and Auburn would both get two losses for subjecting is to this

Funnily enough, the game was terribly boring until the last few minutes. Of course, chaos would reign.

This is almost certainly not enough to save Auburn Coach Bryan Harsin’s job, but, I guess it counts for a win for Auburn.