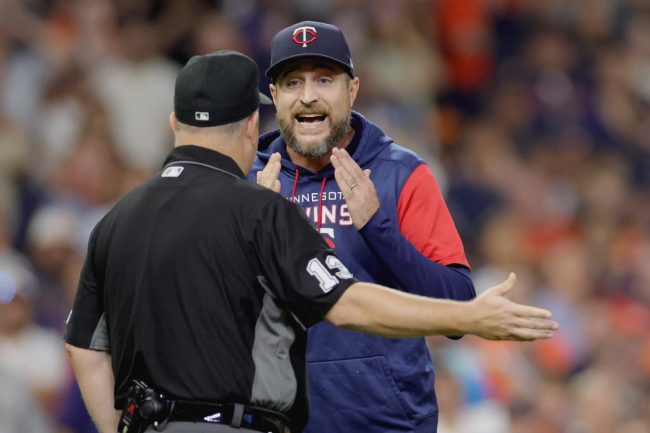 Rocco Baldelli doesn’t have the highest opinion of Major League Baseball umpires these days. Just two weeks ago the Minnesota Twins manager was fined an undisclosed amount by the league. That was for calling out umps over “one of the worst moments I think we’ve seen of umpiring in any game I’ve ever been a part of in baseball.”

The longtime MLB veteran said that he had “some very good conversations” with the league following that play and the subsequent fine. But apparently those conversations may not have stuck.

Because Baldelli was back at it with umpires on Tuesday night, and for good reason.

Twins starter Aaron Sanchez hit Houston Astros star Jose Atluve in the fifth inning of Tuesday night’s game. Altuve initially walked it off after glaring at Sanchez. But then the two began jawing at one another.

The coaches went out to calm Sanchez and the umpires ruled it a mound visit, forcing them to remove him from the game and Rocco Baldelli was HEATED pic.twitter.com/i0wzkI1WMX

That led to benches partially clearing and Baldelli calming down his starter. One batter later, Twins pitching coach Pete Maki came out to speak with Sanchez in a 2-0 game.

The umpires ruled this the second mound visit for the Twins and said that Sanchez had to leave the gun. That set off Baldelli, who went absolute berserk before quickly being ejected.

Here's what Rocco Baldelli, starter Aaron Sanchez and crew chief Todd Tichenor had to say about the mound visit situation from the fifth inning: pic.twitter.com/OguvWTqwdA

Baldelli largely took the high road after the game, but did say he disagreed with the call.

“At the bare minimum, there’s probably — it’s necessary for someone to come over and let us known that a visit was given. So that’s it. I disagreed and I disagreed on multiple levels,” he said according to Twins reported Betsy Helfand.

This is a heartfelt apology from Tatis. https://t.co/t4rPa2O3zO

The Twins ended up losing the game 4-2 after Justin Verlander pitched six no-hit innings for the Astros. Minnesota now sits three games behind Chicago for first place in the AL Central.