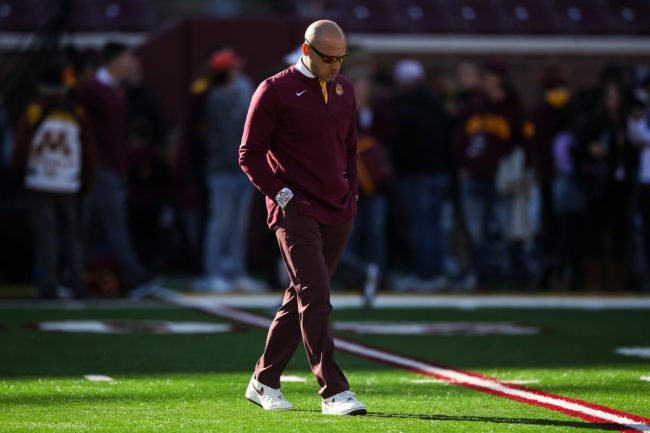 PJ Fleck is one of the hottest coaching names in college football.

The University of Minnesota head man took Western Michigan to new heights before leading the Golden Gophers to a level of success they hadn’t seen in over a century.

But now Fleck may have landed himself in a little bit of trouble. Former Minnesota player Val Martin, who transferred into the program from North Carolina State, put out the following tweet this week.

In a Twitter live video, Martin alleged that Fleck controlled the way that players were allowed to speak and interact in the football building and that even successful players were unhappy in the program.

Some Minnesota fans weren’t buying what Martin was selling.

According to Val:
Fleck: Sit up straight in your chair, be attentive, don't slouch.
Val: I be like boy we grown!

Then goes on to say he’s not selfish and this isn’t about him.

But Martin also shared messages that were allegedly from other players who also had issues with Fleck.

Ian even gon say Minnesota fans bc if yall were really fans you would stand beside and listen to the players lol allegations just keep coming and as a player who was in the seat they sound identical lol so imma jus say yall@fleck fans😭 yall got the right one i said wat i said😭 pic.twitter.com/g0sgnwqTWA

People hatw playing for fleck regardless what u hear them say in the media💯 pic.twitter.com/jI086DW7Tx

And some fans sided with the players, saying that they’re the ones who would know what it’s like inside the locker room.

I read your story on this and I find it crazy how ppl "know" w/o any insight into the lockeroom yall forget Fla ohio st Penn st Baylor they won at those schools too and had toxic shit going on due to coaches..yall assuming and dont know shit never been inside a D1 program ever.

I would take the word of former players — whether they saw the field or not — over outsiders.

I have never met Coach Fleck but purely from what I have seen in interviews he comes off as a fake. https://t.co/JtznyvMo86

Neither Fleck nor the University of Minnesota have responded to the allegations, and it’s unlikely that either will unless directly asked by media. But it’s clearly an unwanted distraction for a coach and program looking to build on a 9-4 season in 2021.