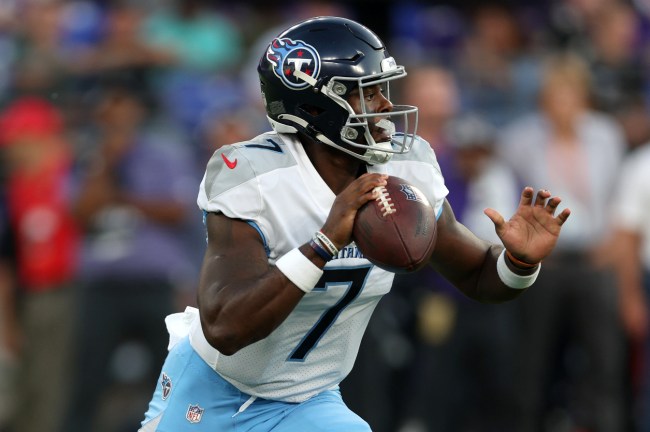 Former Liberty QB Malik Willis has been a sight to see at Tennessee Titans training camp. As of now, Ryan Tannehill is still locked in to be the starter, but Willis has shown exactly why everybody was drooling over him during the NFL Draft process.

On Thursday, the Titans kicked off their preseason slate against the Baltimore Ravens. Willis saw plenty of run early on and was playing well. He went 6-11 for 107 yards in the air and ran the ball five times for 38 yards and a touchdown.

Yet, head coach Mike Vrabel decided to bench Willis in the third quarter, and his reasoning isn’t exactly what Titans fans were hoping to hear.

Vrabel on taking Willis out after the second play of the third quarter: I wanted him to throw the ball. He didn't, so we put in Logan

Vrabel wanted Willis to throw, so he turned to Logan Woodside instead.

This didn’t go over well with the fans. After all, everybody knows how electric Willis is in the open field running the football.

Seems like that coach is not rocking with the rookie https://t.co/r06jC3HDR5

Not a fan of Vrabel and never have been. https://t.co/Cz3iL4Rklk

I’m convinced there’s a disconnect between the Titans front office and HC.

We know how good Willis was while running in college, and he showcased those skills on Thursday night.

Yet, Vrabel wants him to pass more.

Willis spoke after the game, and he understands, although he might not be too happy about it.

Malik Willis on being replaced by Woodside for not throwing the ball (per Mike Vrabel): “I probably ran it more than I threw it tonight…” #Titans pic.twitter.com/NSZJLzu7jx

If Vrabel continues to do this with the rookie, will he ever learn? Nonetheless, Malik Willis is a running QB, and everybody knows that.