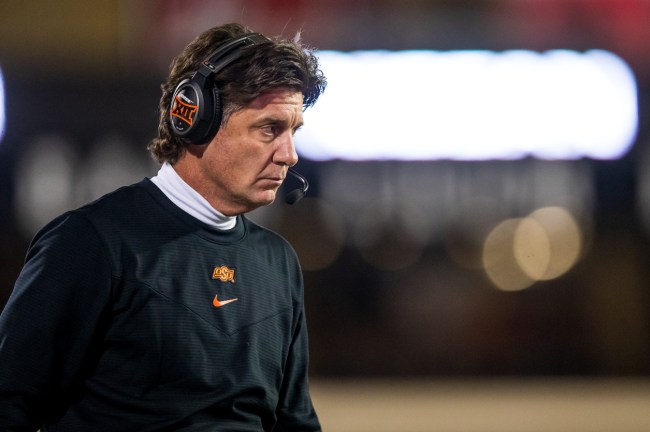 One of the best rivalries in college football is the Bedlam Game. Oklahoma State against Oklahoma is must-watch television.

This past season, the Bedlam Game was the final time Lincoln Riley coached the Sooners, and the very next day, he headed to Los Angeles to take the USC job.

With the Big 12 media days taking place, Oklahoma State head coach Mike Gundy got honest about the Bedlam Game, and he made sure to throw massive shade toward the Sooners in the process.

Mike Gundy: "The future of Bedlam, there's a year or two left. That's because of someone else's decision."

The Sooners are headed to the SEC along with the Texas Longhorns, and Gundy clearly isn’t happy about it.

Gundy says OU and Texas are still in all the Big 12 meetings… “If I were in charge, I wouldn’t allow them to be a part of anything.”

The new Big 12 commissioner, Brett Yormark, said the two programs could leave for the SEC earlier than expected.

The door is cracked open.

Given the new commissioner, many within the SEC believe in the possibility that Texas and Oklahoma can leave a year early – starting in the SEC in 2024 – but the price will be steep. https://t.co/CsjVeJINY9

Nonetheless, Gundy has a little resentment toward the Sooners leaving the Big 12 and the Bedlam Game possibly being done away with.

Could they still play each other? Sure. Are they going to? Who knows.

With the uncertainty of the Big 12, Gundy might be a bit envious of the Sooners’ move to the SEC.

Now, we aren’t entirely sure why Mike Gundy is upset. After all, the Sooners hold a commanding series lead over the Cowboys, and it isn’t remotely close.

Maybe it’s a good thing the Cowboys and Sooners Bedlam time is running out — at least for Oklahoma State.