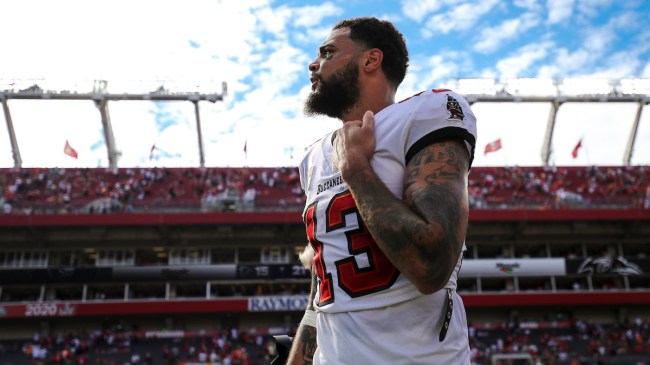 It was a lackluster performance from the Tampa Bay Buccaneers on Sunday against the Carolina Panthers. However, the bigger story came post-game involving Mike Evans and two NFL officials.

Following the 3-21 upset loss, videos surfaced of game officials Jeff Lamberth and Tripp Sutter approaching Evans in the tunnel to the locker room. The referees were seen handing the Bucs WR a piece of paper to write on, but it wasn’t clear why at the time.

Some fans thought the referees were asking for Evans’ autograph, which would’ve violated NFL protocols, and the clip went viral. The NFL-NFLRA CBA states that officials are not allowed to ask players, coaches, or any other team personnel for autographs or memorabilia.

On Tuesday, fans finally received some clarity on the situation and it apparently had nothing to do with football. According to NFL Network insider Tom Pelissero, Lamberth was simply trying to set Evans up with some golf lessons.

Interaction Between Mike Evans And NFL Officials Was Reportedly About Golf

The NFL said in its statement that both Jeff Lamberth and line judge Tripp Sutter “have been reminded of the importance of avoiding even the appearance of impropriety when interacting with players, coaches, and club staff on gameday…”

In other words: Bad look. No discipline.

It turns out that both Lamberth and Evans are former Aggies. So the alleged autograph signing was actually just a bit of networking. The official was reportedly passing Evans’ phone number to a golf pro so the Bucs WR could improve his golf game.

The NFL’s own investigation determined that the officials did not request autographs, but they did remind both officials about the importance of avoiding similar bad-looking situations in the future.

Reporters eventually asked Evans about the controversy during a press conference on Tuesday, where he reiterated that he wasn’t signing an autograph.

“I wasn’t signing my autograph, I’ll tell you that. I talk to a lot of officials, we’re all human beings. He’s a nice guy. That’s all. We were just talking about, you know, golf. That’s all we were talking about.”

The Bucs fell to 3-4 on Sunday, where Evans dropped an easy 60-yard touchdown pass. It’s certainly not the best look that he then appeared focused on golf right after the awful loss.

With this controversy finally cleared up though, the Buccaneers will need to bounce back against the Baltimore Ravens (4-3) on Thursday night.