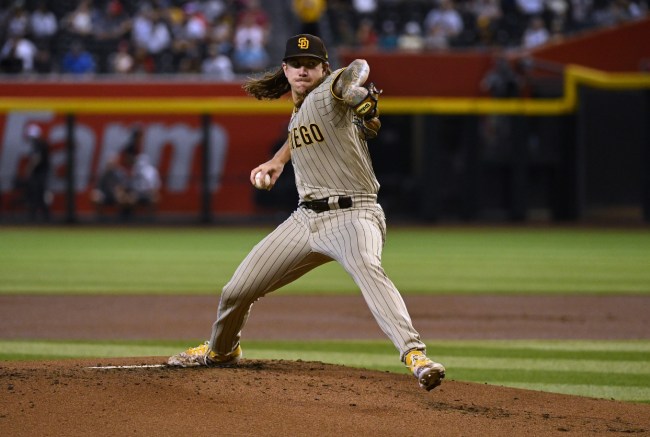 Let the drama continue between the Arizona Diamondbacks and the San Diego Padres. Eric Hosmer gifted the Dbacks a victory with a bizarre decision on Tuesday night, and the two teams finished off a quick two-game series with a Wednesday afternoon finale.

Mike Clevinger got the start for the Padres, throwing six innings of one-hit ball and getting the victory in a 4-0 shutout for San Diego.

But, after the game, Clevinger called out Diamondbacks announcer and former MLB manager Bob Brenly in his postgame interview.

Clevinger looked right at the camera and challenged Brenly to come to the Padres’ locker room. Oh boy.

Mike Clevinger Was Not Happy With Brenly’s Comments

The Padres’ right-hander was not entirely thrilled with something, although speculation circled on what Clevinger was actually upset about. Perhaps it was Brenly and his partner discussing Clevinger’s unorthodox windup technique at the beginning of the game.

Of course, there is more to this Brenly-Padres beef. Let’s not forget what he said about both Manny Machado and Fernando Tatis Jr. in recent years.

I asked #Padres SS Fernando Tatis Jr. about the comments made by Diamondbacks broadcaster Bob Brenly, that Tatis would run easier without that "bike chain around his neck." Here's what he said about it. Just a reminder: He's 20 years old. pic.twitter.com/AKRokdrxgY

So, Brenly has had a few different situations with the Padres over the past few years, and now Clevinger took offense to comments about his delivery and windup technique.

Mike Clevinger was unhappy about comments he heard Diamondbacks broadcaster Bob Brenly made about him during today’s game.
Story to come.

The Padres are heading back to California to take on the Los Angeles Dodgers in a massive four-game series, so they need to forget about this and move on. But, get your calendars ready: The Padres host the Diamondbacks in San Diego from July 15-17, and we will see if there are more fireworks between these two sides.