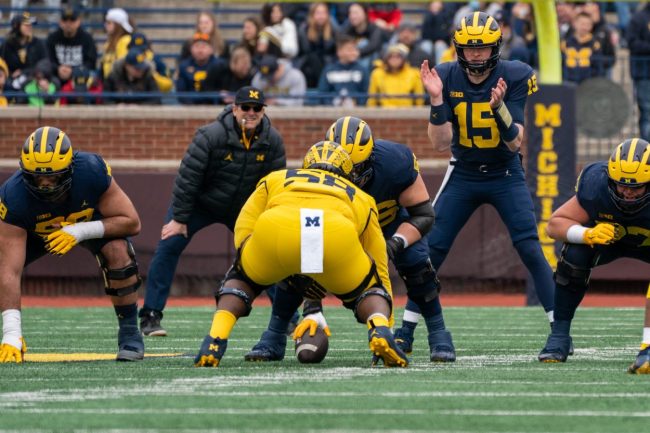 More than 100 University of Michigan student athletes, including a significant portion of the school’s football team, joined the National Guard on Friday as part of a wide-scale Name, Image and Likeness deal.

In total, 120 Wolverines athletes joined the National Guard for training, education as well as flights in in Chanook and Blackhawk helicopters as part of the experience.

120 Michigan student athletes are participating in an NIL deal with the National Guard today.

They’ll fly in Chanook and Blackhawk helicopters and go through team drills with the guard. pic.twitter.com/4aMux0vpS5

Prior to the flight, the players had to cram into buses and head to a helicopter hangar. At the hangar, they were given safety training prior to entering the aircraft and taking off.

For the weak stomached or hearing sensitive players, ear plugs and puke bags were provided.

They’re handing out ear plugs and puke bags before the players load into the helicopters pic.twitter.com/rofX6T3WrK

The flights weren’t just a quick up and down, either. Players boarded the copters and took over an hour-long flight that included a scenic view of The Big House, Michigan’s football stadium, in Ann Arbor.

Michigan football players taking off in the Blackhawk helicopters. The first group is flying for over an hour and will swing over the Big House in Ann Arbor. pic.twitter.com/CLfXXUA5zN

The experience is part of a massive group NIL deal between the student athletes and the Army National Guard focused on recruitment. Michigan Governer Gretchen Whitmer released the following statement on the partnership:

“The Michigan Army National Guard steps up and serves Michigan communities every day,” said Governor Gretchen Whitmer. “Joining the Guard is a great way to kickstart your career and embark on pathways to higher education, skills training and good paying jobs. I am grateful for the collaboration between these student-athletes and the Michigan National Guard to highlight the Guard’s excellent career options – a partnership made possible by the NIL legislation I signed in 2020. As a Spartan mom with two Wolverine daughters, today I am proud to join the UofM student-athletes on Team Michigan. Go Blue and go Guard!”

The deal is one of the coolest and most unique NIL deals we’ve seen to date, and another example of what NIL brings to the table for college athletes.