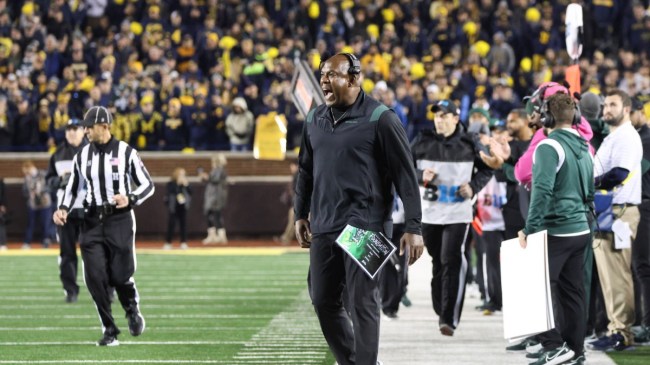 It’s been an interesting few weeks for the Michigan Wolverines and tunnels. Two weeks after Penn State allegedly threw peanut butter and jelly sandwiches at the Wolverines during halftime, another incident occurred. This time, it was at the end of the Michigan-Michigan State game.

Of course, Michigan Stadium only has one tunnel for both teams, and this leads to incidents between the two teams. This time, though, it got violent.

Video Shows Things Getting Physical Between Michigan and Michigan State

Here are some videos of the incident. You can judge for yourself.

Sparty got whipped then appears to have ganged up on a Michigan player in the tunnel. Weak. pic.twitter.com/2EVtzRnvWf

It certainly doesn’t look good for Michigan State. But, we can’t be sure what was said or done in the tunnel or on the field.

For some context, here is the scene after the game in the tunnel.

What happened before the situation in the tunnel between Michigan and Michigan State…. pic.twitter.com/IAtwbMZGXB

Again, not a good look for Sparty. Michigan athletic director Warde Manuel spoke about the incident.

And, on Sunday, University of Michigan police said they were looking into the incident.

Suspensions announced by Michigan State. No length of suspension revealed. And it sounds like more could come. pic.twitter.com/Pv3nslDCou

As Pat Forde says, more suspensions could be coming.

It’s a bad look for the Spartan program, which has struggled on the field this year as well. The Spartans are 3-5 overall and just 1-5 in the Big Ten. With games left against top-20 teams Illinois and Penn State, things do not look good in terms of bowl eligibility just one year after going 11-2.