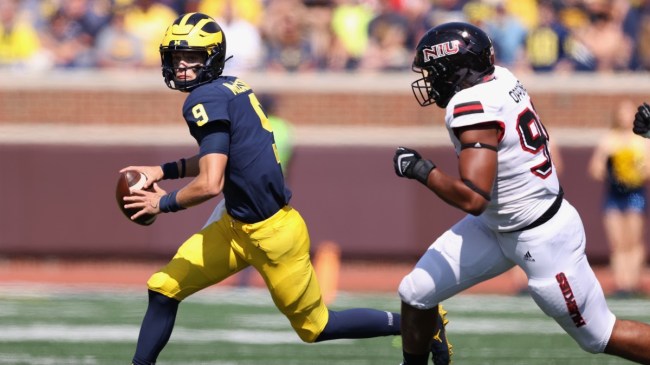 A season ago, Cade McNamara led the Michigan Wolverines to a 12-2 season, a Big Ten title, and a playoff berth. So, it would make sense that Michigan would stick with the Man who got Michigan as far as they have been in twenty-five years, right? Well. Not so fast. Michigan coach Jim Harbaugh announced at the end of preseason that McNamara and highly-touted sophomore JJ McCarthy would each start one of the first two Wolverine games. After tonight’s blowout win over Hawaii, Harbaugh made his choice. JJ McCarthy will be the starter going forward.

McCarthy outplayed McNamara and made the decision easy for Michigan

In McNamara’s week one start against Colorado State, he was just 9-18 for 136 yards. But, in that game, McCarthy was a perfect 4-4 with an electrifying rushing touchdown.McCarthy was 11-12 for 229 yards against Hawaii in his start. A performance like that meant that was that for this quarterback battle.

I advised fans to not get hung up on box scores in these games, but those aren’t even close

Most Michigan fans are in agreement that McCarthy is the right guy. But, some fans at Michigan Stadium went a little overboard in their treatment of a quarterback that took them to the playoff.

JJ McCarthy clearly deserves to be Michigan’s starting QB, and Cade McNamara has not played well these first two games, but the way the crowd is treating a guy who just helped lead Michigan to its best season in 25 years… it’s disappointing. McNamara deserves respect.

@DavisMoseley points out that this was not really a decision made by the coaches but by the two signal-callers themselves.

I want to preface this by saying, Cade McNamara absolutely deserves better than being booed. This is a captain and leader who has done wonders for the program.

Michigan appears to have a lot of potential with McCarthy under center. He adds a a whole new dynamic to the Wolverine offense in terms of his mobility and ability to get the ball down the field. The Wolverines is already strong in the trenches and this could help take their offense to a new level.