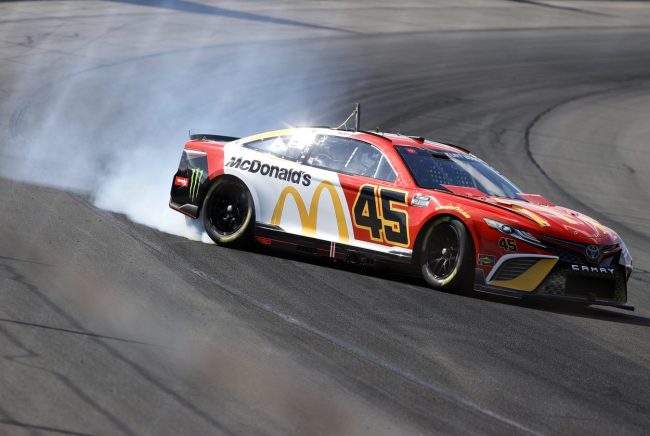 Things had been looking up recently for Michael Jordan’s 23XI NASCAR Cup Series Team. The team made a power move to sign one of the sports top prospects in Tyler Reddick. Kurt Busch won a race at Kansas to qualify for the playoffs in just the team’s second year of existence. And they continue to run some of the best paint schemes in the series.

But in late July, with momentum building, disaster struck.

Busch wrecked his No. 45 car in qualifying for the Cup Series race at Pocono. Not only did it mean that he’d have to start the race from the back, but it turns out he also suffered a concussion in the accident.

The concussion kept him out of the race at Pocono and he’s yet in the four races since while dealing with post-concussion syndrome. Teenage phenom Ty Gibbs has spelled Busch in his absence, but there was hope the veteran would return in time for the first playoff race on Sept. 4 at Darlington Speedway.

We learned Thursday morning that that won’t be the case. Instead, Busch will miss further time and he ceded his spot in the playoffs.

Jordan Bianchi of The Athletic had more on the decision:

“As much as I wanted and hoped to be able to get back in the No. 45 car to make a playoff run with our team, it’s still not the right time for me,” Busch said in a statement. “In addition to not being cleared to return to racing, I know that I am not ready to be back in the car. I respect the sport of NASCAR and my fellow drivers too much to take up a playoff spot if I know I can’t compete for a championship this season. The decision was not an easy one, but I know it is the right thing to do. I will continue to take time to heal and strengthen as I prepare to be back in the car and will do all I can to help 23XI have a successful end to the season.”

The decision is a big win for Penske driver Ryan Blaney and Joe Gibbs Racing driver Martin Truex Jr. Both sit on the bubble with one regular season race remaining. Blaney holds a 25-point cushion to Truex, who would be the first driver out. Now both could qualify for the postseason if a new winner does not emerge Saturday night at Daytona.

What's next for Danny Ric? https://t.co/mCv29E9JMF

The playoffs begin with the historic Southern 500 at Darlington Speedway. That race is being promoted by Coastal Carolina QB Grayson McCall as part of a unique NIL deal.