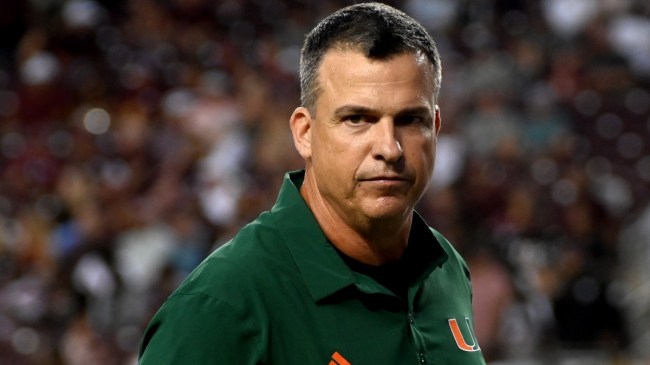 If you’re older than, say, 30, you remember the golden days of Miami Hurricanes football. Whether it was the era of stars like Alonzo Highsmith and Michael Irvin or Ed Reed and Sean Taylor, maybe no program was cooler than Miami.

But, things have not been the same in Coral Gables since that fateful double-overtime loss to Ohio State in the BCS championship game twenty seasons ago. The Hurricanes hired native son and former Oregon coach Mario Cristobal to get them back on top. But, it’s not happening for the Hurricanes right now. They lost 17-9 to Texas A&M last week and today is not going much better…

Middle Tennessee is doing whatever they want with Miami

Surely, the ‘Canes would bounce back from last week’s road loss, right? Well.

Make that a 24-3 lead for Middle Tennessee over Miami…

The Blue Raiders of Middle Tennessee are a fine G5 football program. But, this is embarrassing for the ‘Canes.

The college football world is laughing, while Miami fans are fuming

Say what you will, but Miami remains one of the best June, July, and August teams in the country. pic.twitter.com/mV0GsiTemO

It wouldn’t be a Miami Hurricanes game without some goonball behavior by fans.

Things are falling apart on the field AND in the stands for Miami this afternoon… pic.twitter.com/hUKnKD51or

But, maybe the crowd fooled the Hurricanes into thinking it was just a scrimmage or something. This is pathetic.

No. Not a great college atmosphere at all. Lol Miami. pic.twitter.com/35NCoBuP5w