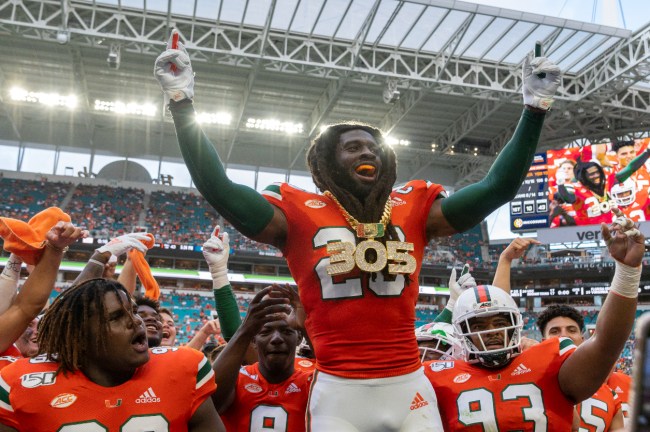 The Miami Hurricanes made a major splash by bringing in Oregon Ducks head coach Mario Cristobal. The college football landscape changed drastically with several hires, including Lincoln Riley and Brian Kelly, but Cristobal was a tremendous get for Miami.

Cristobal hasn’t even coached one game yet for the Hurricanes, but he has already made a major change to the team. According to Brett McMurphy of Action Network, they are ditching the famous Turnover Chain.

If you’re a Miami fan, you probably aren’t thrilled about this. As Cristobal said, “It’s not part of our culture.” That means Cristobal is making a culture change with his new job.

Maybe Cristobal saw the stats and decided to get rid of it — the turnovers have decreased in recent years. This news isn’t going over well with college football fans in general.

The turnover chain was cool, it had nothing to do with Miami playing poorly and its demise is the loss of what had become a really fun new tradition. Lame.

Miami should bring back the turnover chain but make it more large and obnoxious every week https://t.co/LyPIWe3I3g

I kind of liked the turnover chain, and thought Miami was of one the few schools do to the prop thing well https://t.co/1O6mPlDE2D

The Turnover Chain brought about some terrific memories, and with its disappearance, let’s look at some of them.

MIAMI GOT RID OF THE TURNOVER CHAIN?! What a sad day it is. pic.twitter.com/UfecS0rugE

Miami's turnover chain is my favorite part of the 2017 CFB season so far pic.twitter.com/y04JMJbyf5

🔥🔥😂🏈 Miami Hurricanes were out there stunting in their turnover chain. pic.twitter.com/V2KjbYIN1N

When you think of the Miami Hurricanes, you tend to think of the Turnover Chain, especially in recent years. But, that is no more, and Mario Cristobal is establishing a new culture. Things better go well in Miami, or Cristobal will be ripped for taking away the chain.

The Miami Turnover Chain is no more.