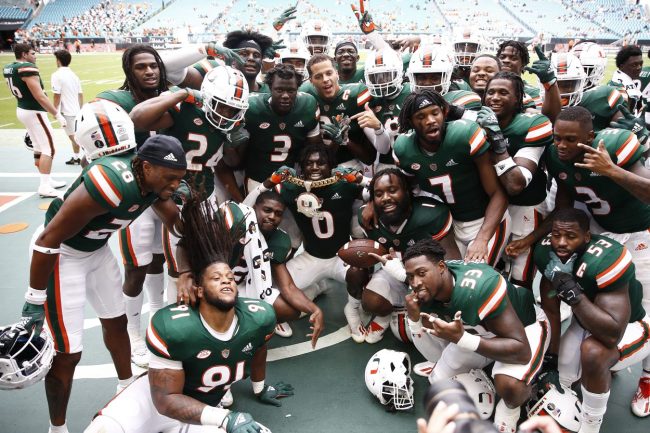 Turnover chain out. Miami Nights uniforms in. It is, in fact, all about “The U” right now on college football Twitter.

New head coach Mario Cristobal and the introduction of NIL into the college football world have the Miami Hurricanes back in the spotlight. This despite the Canes winning 10 games just once over the last decade and appearing in just the one game New Year’s Six game in 2017.

Despite Cristobal coming over from Oregon and immediately ditching the famed turnover chain, it appears that it’s once again cool to be apart of The U. Name, Image and Likeness has helped the Hurricanes to build the No. 9 recruiting class in the nation in 2023 according to 247Sports.

Cristobal was an offensive lineman for Miami from 1989-92 and was member of two national title teams (1989 and 1991). Hey then served as an assistant on the Hurricanes coaching staff over six seasons. He returned to Coral Gables to replace Manny Diaz after five years as the head coach of the Oregon Ducks. He went 35-13 in those five seasons.

Now Cristobal is adding a little flare of his own to his hometown program.

The slick new unis are inspired by Miami’s famous nightlife and feature neon piping on an otherwise contrasting all-black jersey and pants.

These are incredible. Is The U back? https://t.co/WtK55wfcJ3

Cristobal has a lot of work to do to return Miami to the top of the college football world after two decades away. But it appears he and the program are off to a pretty strong start.

Is this too little, too late from Deshaun Watson? https://t.co/nMBHKwaikx

The Canes kick off the 2022 season on Sept. 3 when they play host to FCS Bethune-Cookman University.