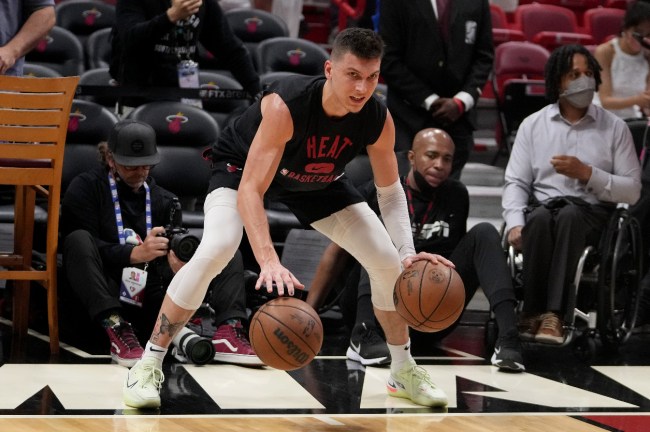 The Miami Heat probably had difficulty watching the NBA Finals after they came up just short in the Eastern Conference Finals. Nonetheless, the Heat roster is still loaded, and they have some issues to iron out in free agency.

Perhaps the most pressing question is what to do with Tyler Herro. With free agency almost here, it looks like the Heat are ready to make Herro a very happy man, according to Jake Fischer of Bleacher Report.

Early indications are Tyler Herro’s extension with Miami will settle around $25 million in average annual value.

Wow. So, per Fischer, the Heat are aiming for a $25 million per year deal to keep Herro in South Beach. That is a lot of money, and Dallas Mavericks point guard Jalen Brunson is rumored to pursue a similar deal to play for the New York Knicks.

The Miami Heat Might Regret Paying Tyler Herro That Much Cash

On the one hand, Herro is one of the better young players in the NBA and an essential part of the core in Miami. He averaged 20.7 points with five rebounds and four assists this past season while shooting 39.9% from beyond the arc. Those are solid numbers, although Heat fans will remember his disappointing performance in the playoffs this past season.

We saw the Kings give Hield this type of money for similar regular season numbers (Obviously Herro better) but I’m not giving him more than 20 mill per https://t.co/Zm5V7uGJET

On the other hand, the Heat made one mistake by cashing out Duncan Robinson on a five-year deal worth $90 million. Up to this point, that deal has been a downright disaster for the Heat. Robinson averaged just 10.9 points this season and was essentially unplayable during the postseason.

Herro is a much better player, but the Heat might want to think twice before throwing out another massive contract to retain one of their own.