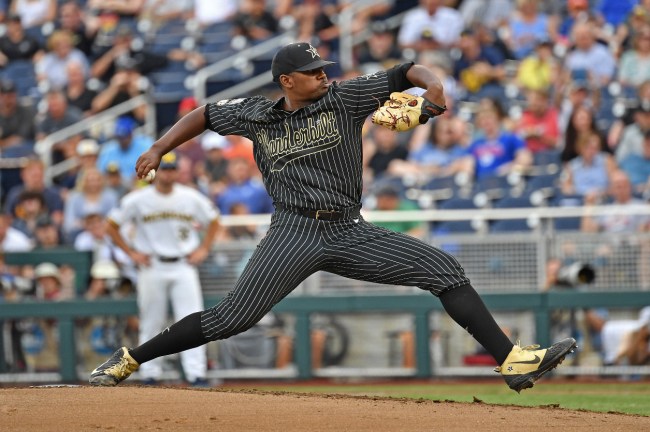 A year ago, the New York Mets selected Vanderbilt star Kumar Rocker with the 10th overall choice in the 2021 MLB Draft. Rocker was expected to come in and become a sensation, and his college tape gave everybody a ton of hype.

Rocker then joined Tri-City of the independent Frontier League. In five starts, he put together a 1-0 record with a 1.35 ERA.

Now, in the first round of the 2022 MLB Draft, Rocker heard his name called by the Texas Rangers at No. 3 overall.

In a big draft surprise, Kumar Rocker goes No. 3 overall to the Rangers — seven spots higher than he did last year to the Mets.

Mets fans aren’t thrilled with Rocker going elsewhere and will always think of what could have been.

I hope Rocker has a long, Hall of Fame career. I really hated how my favorite team talked about him like a chess piece last year. https://t.co/Lwtvvlq8Fi

Massive fuck up by the Mets https://t.co/Px9Pdf4mnv

I'm seeing Nolan Ryan type situation all over again for the Mets. https://t.co/ER3iV5cLfe

So glad he’s in the AL West so he can’t haunt the Mets https://t.co/YfrHxjbehG

I hope Kumar Rocker celebrates a World Series with the #Rangers before the #Mets get to experience their next.

Is it a risk? Sure, but Rocker’s arm was deemed healthy last summer by the time the Mets passed on offering him a deal.

Want to hear another cool nugget? Rocker is reunited with former college teammate and young star pitcher Jack Leiter. The Rangers selected Leiter, son of Al Leiter, with the second overall choice in the 2021 MLB Draft.

The two former Vanderbilt teammates were both Golden Spikes Award Finalists in 2021 and shared the Division-I lead with 179 strikeouts that year. pic.twitter.com/YOAZFwstYK

The two stars are back together, and Mets fans will be going through pain whenever Kumar Rocker pitches against them at the big league level.