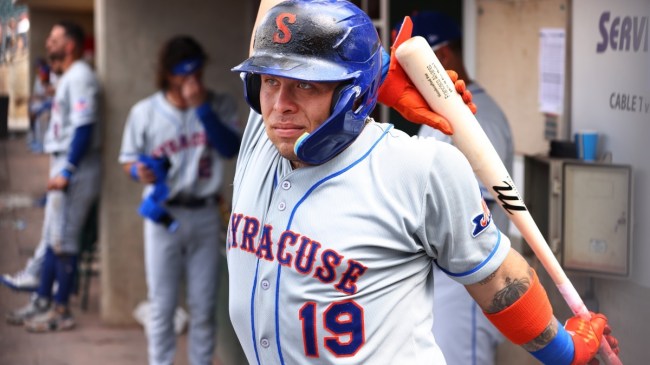 It’s been quite the season for the New York Mets. They have 98 wins and with six games to go, they hold a one-game lead on the Atlanta Braves. The two teams play a three-game series in Atlanta this weekend, and if the Mets win one of those games they will have the tiebreaker over the Braves.

But, their two big weaknesses on offense have been the catching position and designated hitting against left-handed pitching. Tomas Nido, who was supposed to be the backup to James McCann coming into the season, has beat McCann out for the top catching spot and has hit at least a mediocre level. But, the designated hitter situation has been a mess. New York acquired Darin Ruf at the deadline from the Giants, and all he’s done is been one of the worst hitters in baseball. They called up prospect Mark Vientos, but he has struggled. Now, they’re playing their final card.

The Mets are calling up Francisco Alvarez, arguably the top prospect in baseball

Francisco Alvarez has been exciting Mets fans in the minors for years. The 20-year-old is known as a plus hitter and a plus leader behind the plate and is ranked as the top prospect in baseball by MLB.com.

And now, the Amazin’s are calling him up to the show, just in time for the biggest three-game series in baseball this entire year.

Per reports, the Mets will be calling up Francisco Álvarez tomorrow pic.twitter.com/85P2lcA8Pg

It’s quite the call-up, given there are less than a week’s worth of games.

You don’t see many 20-year-old-catchers in Major League Baseball. The Orioles made former-number-one-prospect-in-baseball Adley Rutschman wait till he was 24. All he’s done is light the world on fire. Alvarez is young for any position, especially catcher.

Francisco Álvarez can not purchase an alcoholic beverage & he's joining the #Mets tomorrow in the BIGGEST series of the year. #LGM pic.twitter.com/IMuxEW5ZWJ

The Mets had the best hitting catcher of all time in Mike Piazza, but it’s been a while since they’ve had someone behind the dish that could really rake on a consistent basis.

It’s time we finally have a hitting catcher

This is a risk though. There’s no easing-in-period. These are the biggest regular season games the Mets have played in fifteen years, and he’s gonna go right into the middle of it. And, the Mets wouldn’t make this move if they thought he couldn’t help them in the playoffs.

Strange choice and timing. I guess if he’s on the 40-man he’s postseason eligible.
But throwing him into that mix now seems like a crazy risk (to the team, not him). Note, he’s initially struggled at every level until he figures it out and then destroys it.

It will be interesting to see how this turns out down the stretch and if he can be the catalyst for the Mets’ third World Series.