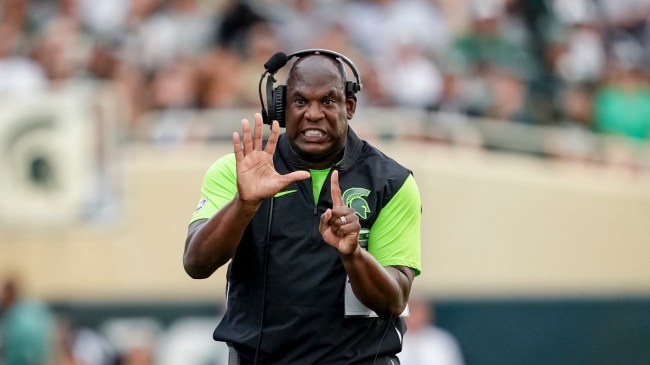 Last year was a dream for Michigan State and the then-second-year head coach Mel Tucker. They started 8-0 and got to as high as number three in the country before finishing 11-2 with a win in the Peach Bowl.

Naturally, Michigan State couldn’t wait for sustained success from Tucker and apparently, money was burning a hole in their pocket. They handed Tucker a 10-year $95 million dollar extension last year to make him one of the highest-paid coaches in all of football. The timing, five days after they got smashed by Ohio State 56-7, was interesting. But, they thought they had their guy. Spartan fans may not think that anymore.

Michigan State fans are having buyer’s remorse On Tucker

Sparty has not looked as good in 2022. Michigan State has been blown out two weeks in a row by Washington and Minnesota. In their week 4, 34-7 loss to the Golden Gophers, they were outgained 508-240. A good chunk of those yards was in garbage time, too.

After today, the comparisons to Brady Hoke started. And, in the state of Michigan, you do NOT want to be compared to Brady Hoke.

A lot of the criticism surrounding Tucker is about having poor assistants. And, this fan thinks Tucker needs to start making tough calls when it comes to the staff.

Mel Tucker better start making decisions that folks who make $10M/yr make. I’m so curious to find out if he will.

This year, Tucker doesn’t have Kenneth Walker III to carry the offense, and he looks pretty ordinary as a coach.

Maybe Tuck isn’t good and it was all K9

It's 60 degrees in East Lansing but Mel Tucker is sweating like a dude who knows he just stole $95 million from a public university and has been exposed as a fraud. pic.twitter.com/OM7Zv3Nw0x

Things better turn around in East Lansing, or else Michigan State is on the hook for the GDP of a small American city to a bad coach.