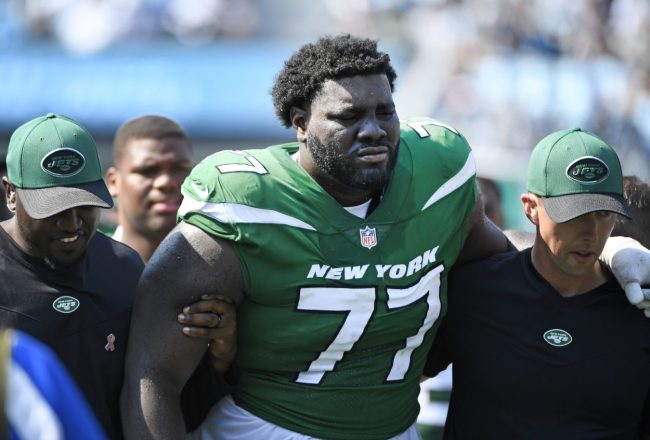 There’s never a dull day in the NFL career of New York Jets offensive tackle Mekhi Becton. Though right about now, that’s probably all Becton is hoping for.

After missing all but one game in 2021 due to a knee injury and subsequent issues with his rehab as well as his weight management, Becton returned this offseason re-energized and revitalized. Rumors swirled around the gargantuan OL that he missed additional time last season due to excessive weight gain.

Jets head coach Robert Saleh attempted to shut that talk down early in the offseason. But they arose yet again in the first days of training camp which led to Becton getting into an animated Twitter exchange with ESPN reporter Rich Cimini.

New York was hoping to ease the burden on Becton by moving him to right tackle and starting George Fant at left tackle. The Louisville product showed encouraging signs early in camp, including a highlight real pancake block in a drill.

But then things got ugly yet again.

The Mekhi Becton injury as captured by fan. #Jets pic.twitter.com/KFdrOEGfrF

Saleh initially said that he didn’t think the injury was serious, but after reevaluation it appears the injury could cost Becton significant time. The latest reports indicate that Becton could miss the entirety of the 2022 season.

There is legitimate fear Mekhi Becton's 2022 season could be over, I'm told. #Jets

Should Becton miss the entirety of the season, he will have played in just 15 of 50 possible regular season games since New York selected him No. 11 overall in the 2020 NFL Draft.

Chicago Bears fans are having a no good, very bad offseason. https://t.co/nIQjTocafB

It’s a sad development for the young lineman who once looked a promising part of the Jets’ future. New York has recently been linked with free agent offensive tackle Duane Brown. Brown is a five-time Pro Bowl selection and now looks even more a priority for the team.