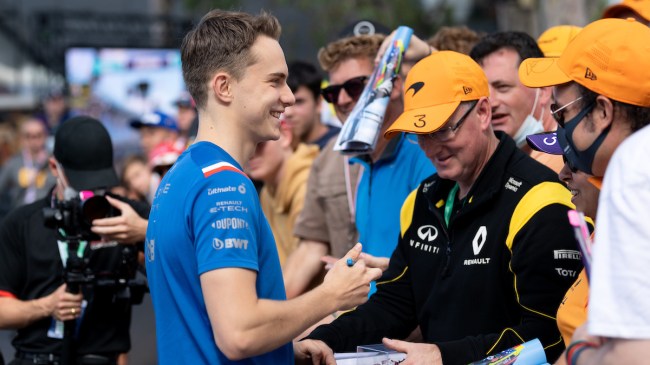 Formula One’s Contract Recognition Board has spoken and, unfortunately for Alpine, Oscar Piastri will be driving for McLaren in 2023.

The Alpine-McLaren drama began when the French F1 team named Piastri as their replacement for Fernando Alonso. The Aussie driver complicated things by denying reports and the CRB stepped in to resolve the dispute. With the resolution finally here, it’s revealed some concerning details about the timeline of McLaren’s contract talks.

The CRB declared on Friday that it only recognized Piastri’s contract with McLaren and he was announced to the team’s 2023 driver line-up soon after. Unlike Alpine’s announcement, Piastri actually confirmed the reports this time.

“I’m extremely excited to be making my F1 debut with such a prestigious team as McLaren and I’m very grateful for the opportunity that’s been offered to me… I’m focused on preparing for my F1 debut in 2023 and starting my F1 career in papaya.”

The news comes as expected. McLaren previously announced that it was mutually splitting with current driver Daniel Ricciardo at the end of the 2022 season. The CRB’s decision thus allowed Piastri to join Lando Norris as Ricciardo’s replacement for 2023.

While the ruling brought closure to Alpine’s dispute, the controversy quickly shifted over to McLaren. Reports revealed that Piastri signed McLaren’s contract back in early July, just days after the 2022 British Grand Prix.

Interestingly, McLaren appeared committed to Ricciardo at that time. Despite signing Piastri on July 4th, McLaren Racing CEO Zak Brown stated Ricciardo would remain with the team on July 11th.

Ricciardo then posted a heartfelt message committing to them on July 13th. Given McLaren seemingly knew about their plans and opted not to inform Ricciardo, it’s not a great look for the British F1 team.

So it's now clear that when Daniel Ricciardo put out this heartfelt social media post about committing to McLaren… McLaren had already signed the deal with Piastri 😬 Ouch. pic.twitter.com/w9syP3gAaD

Ricciardo was asked about his knowledge of the timeline of events following the Piastri announcement. It appears he was just as uninformed as the rest of us.

F1 teams and drivers signing deals behind each others’ backs is nothing new. Fernando Alonso not informing Alpine of his departure to Aston Martin earlier this summer is just one example.

However, McLaren team principal Andreas Seidl spoke to Motorsport.com and insisted they kept Ricciardo well-informed throughout the process.

“Regarding Daniel, as we have communicated last week, I think throughout this year Daniel, Zak and myself had an open and transparent dialogue at any time of where we both are. Therefore, there is no issue in that aspect.”

The decision has ultimately been made and Piastri will drive for McLaren in 2023. As for Ricciardo’s future plans, that’s still being decided.

Daniel Riccardo has stated his wishes to remain in Formula One along with his willingness to return to Alpine. Pierre Gasly remains the front runner for that seat though, so Haas and Williams are more likely options for Ricciardo.