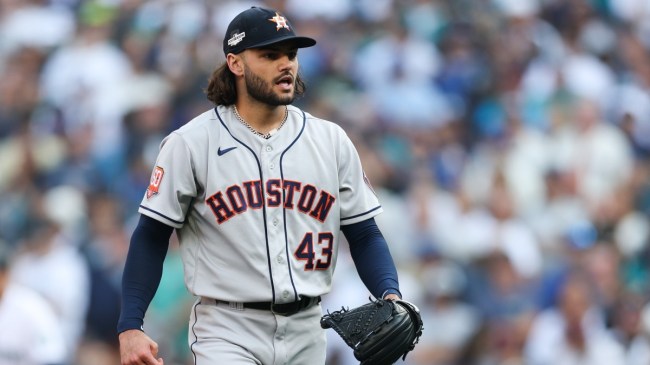 Despite the cheating scandal that captured the sports world, the Houston Astros have been one of the most successful franchises over the past half-dozen years. They’ve won the American League Pennant three times since 2017 and captured the World Series in 2017 as well. They’ve also won the AL West in every full season since 2017.

They’re rolling right now, too. After sweeping the Seattle Mariners in the ALDS, they’re up 2-0 on the Yankees in the ALCS. They’ve done that without star pither Lance McCullers Jr. pitching any of the games against the Yankees so far. And, there’s a hilarious reason for that.

Lance McCullers Jr. Was Injured In Their ALDS Celebration

The Astros won a marathon game over the Mariners in the ALDS that lasted 18 innings, before the ‘Stros finally scored to win 1-0. And the celebration must’ve been intense, because it literally hurt Lance McCullers Jr.

Lance McCullers Jr says he got hit on the elbow bone by a spare champagne bottle during the Seattle celebration, so that is why he got pushed back one game. He threw a bullpen today and says everything is fine. Lance will start in game four.

Wow. I’m not sure I’ve ever seen a postseason start pushed back because of a celebration injury. Thankfully, nothing worse happened, as we all know how finicky pitchers’ elbows are

Here is the video of his quote.

Lance McCullers Jr “caught a champagne bottle to the elbow” during the ALDS clubhouse celebration after beating the Mariners. “I’m fine..it was no one’s fault, it was an accident” pic.twitter.com/7D7DQKkzof

McCullers could have a chance to close out the ALCS if the Astros win game three Saturday in Yankee Stadium.