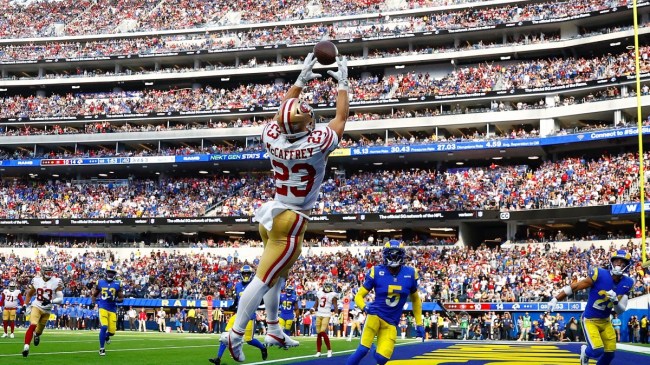 Christian McCaffrey is one of the most versatile and explosive weapons in all of football. The Stanford product can do it a ll out of the backfield. And, when the 49ers acquired him from Carolina prior to week seven, it seemed like a match made in heaven. After all, San Francisco coach Kyle Shanahan employs one of the most creative run schemes in the game and is great at getting his best players the ball in space. We saw it with Deebo Samuel last year, and many had no doubt he could do it with McCaffrey.

After a decent debut in week 7 in which McCaffrey had 62 yards on 10 touchdowns just hours after arriving in the Bay, he was all set for the week 8 clash against the Rams. And, he made quite the first impression.

The versatile McCaffrey showed off his breadth of skills in Sunday’s 49ers win.

First, he hooked up with Brandon Aiyuk for a 34-yard touchdown pass.

#49ers Christian McCaffrey with the TD Pass to Brandon Aiyuk!!!!

And, after a 9-yard touchdown reception in the third quarter, McCaffrey completed the triple crown with this rushing touchdown.

It’s quite the feat, and he’s the first player since Ladanain Tomlinson in 2005 to have all three kinds of offensive touchdowns in the same game.

Christian McCaffery has thrown for, rushed, and caught a touchdown today!

The first time a player has accomplished this since 2005 (LaDainian Tomlinson) pic.twitter.com/j43Nepa3pQ

And while it’s happened eleven times in NFL history, it’s only happened four times since the merger, including McCaffrey on Sunday.

Christian McCaffrey is the 11th player in NFL history to have a touchdown rushing, receiving and passing in the same game. The only other players to do it since the merger were Walter Payton, David Paten and LaDainian Tomlinson.

It’s only two games in, but that trade seems to be working out quite swimmingly for San Francisco. They evened their record at 4-4 and are on a bye in week 9 before playing the Chargers on Sunday Night Football in week 10.