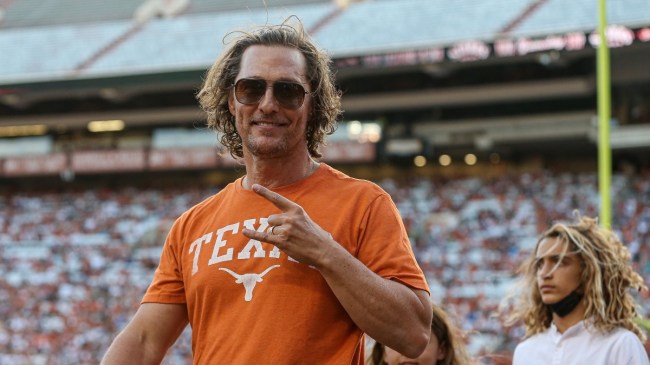 Texas Football has been searching for their “Texas is back” moment for quite some time now.  So much so that it has become a meme. They’ll get their chance to prove they are back on Saturday when they welcome number-one Alabama to Austin. Not to worry Texas fans, as Matthew McConaughey is pitching in to help pump up the Longhorns.

The time has come

It wasn’t the first time the native Texan spoke to the Texas football team before a big game. Back in 2016, the superstar actor told the Longhorns to “let it rip” before their season-opening matchup against Notre Dame. Texas went on to win that game, prompting many to declare “Texas is back” prematurely.

McConaughey’s speech was good, but it may not be enough for the Longhorns on Saturday. Alabama comes in as 20.5-point favorites. It will be Texas quarterback Quinn Ewers’ first big-time start, and it will be a huge test for the redshirt freshman.

Of course, he will have to deal with a ferocious Alabama defense led by the best pass rusher in the nation, Will Anderson. If Texas, which has struggled up front in recent years, can’t protect Ewers it will be a long day.

Even if Texas can score some points, they have to deal with defending Heisman Trophy winner Bryce Young and an offense that was clicking on all cylinders in their season-opening win against Utah State.

Most people think this will be an Alabama blowout.

By the second quarter: pic.twitter.com/xnPFhMB4CX

If Texas does win, it will be fair to say that Texas Football is back.