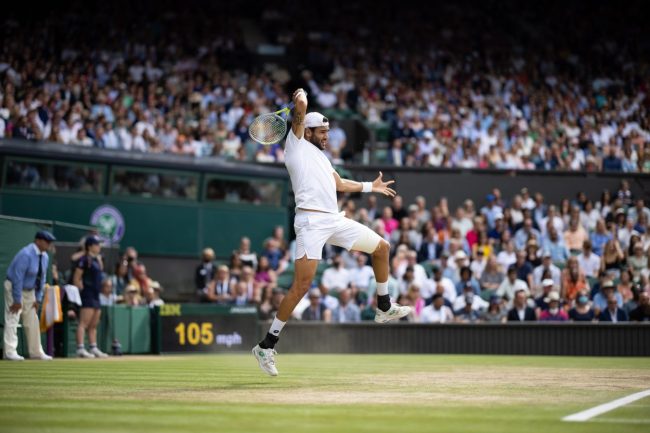 Italy’s Matteo Berrettini had high hopes for Wimbledon in 2022.

Berrettini tested positive for COVID-19 on Tuesday and was forced to withdraw from the tournament.

This comes after he won his second straight Queen’s Club Championship and appeared to be entering Wimbledon on a high note. Berrettini has shown strong form throughout the new season. He reached the semifinals in the first major of the year, the Australian Open, before falling to eventual champ Rafael Nadal.

Many considered the 26-year-old the favorite after winning his last two grass court championships, and Berrettini wasn’t backing down from those expectations.

“I don’t feel like I’m the favorite but I know I can do it, I can’t pull the wool over people’s eyes. My aim is to have a big tournament at Wimbledon and I hope it will be two intense weeks,” he said after his most recent victory.

Tennis fans were devastated when they woke up to the news of Berrettini’s absence.

Last year’s finalist Matteo Berrettini is out of #Wimbledon after testing positive for covid-19.

He was coming in on a 9-match winning streak having won Stuttgart and Queen’s. pic.twitter.com/Vs1B5iRZ1m

Absolutely gutted for Matteo Berrettini. What a grass court season he was having.

this user is heartbroken for matteo berrettini

Brutal news to wake up to. Matteo Berrettini is out of #Wimbledon after testing positive pic.twitter.com/3NfQC5bRXK

Berrettini joins world No. 17 Marin Cilic, who reached the finals at Wimbledon in 2017, as players to pull out due to COVID. Both moves open up the draw for Nadal, who hasn’t won Wimbledon since 2010.