Matt Barnes Walks Back On Ime Udoka Defense, Claims Situation Is ‘100 Times Uglier Than Any Of Us Thought’ 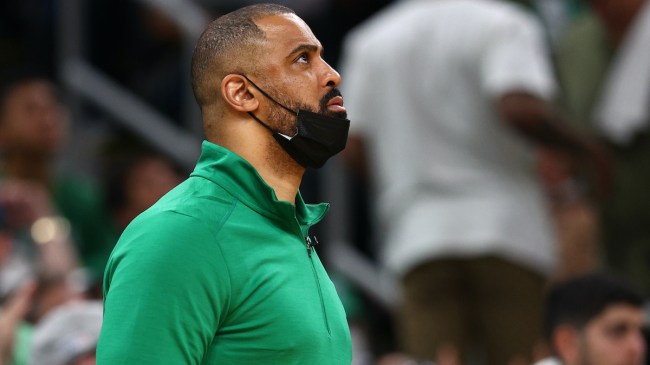 The NBA world received shocking news with the suspension of Boston Celtics head coach Ime Udoka and each day is revealing new worsening details about the situation.

The Celtics suspended Udoka on Thursday for violating team policies after initial reports of an intimate relationship involving himself and a Celtics staffer surfaced. Despite the alleged affair, some in the community criticized the season-long suspension and came to Udoka’s defense, including former NBA player Matt Barnes.

However, subsequent reports claimed the staffer had accused Udoka of making “unwanted comments” toward her. After speaking to an insider source, Barnes has now taken back his comments and explained why via Instagram.

Barnes, who is an NBA analyst for ESPN, admitted that his initial comments came without full knowledge of the situation. He retracted his support for Udoka on Friday and then painted a very troubling picture in Boston.

“Last night, without knowing all the facts, I spoke on Ime Udoka’s defense. And after finding out finding the facts after I spoke, I erased what I posted because the situation in Boston is deep. It’s messy. It’s 100 times uglier than any of us thought and that’s why I erased what I said.”

Barnes didn’t disclose the details that caused him to change his mind, stating it wasn’t his place to do so. However, his comments seem to suggest there may be more to the reports of recent accusations.

His original message claimed the inappropriate but consensual relationship was “a very common situation” in the league. He has since apologized after learning the full story.

Given the dark picture that Barnes paints, it seems there’s even more gravity to the situation than most initially anticipated. Until more clarity is provided, it’s unlikely the story will go away anytime soon.