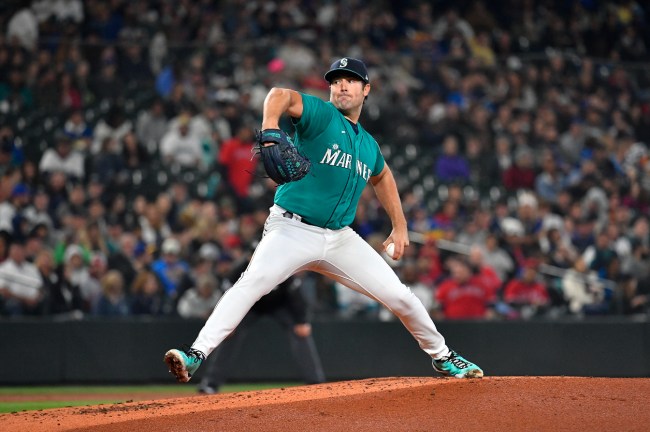 The Seattle Mariners were cruising against the Los Angeles Angels on Friday night. Robbie Ray was brilliant and was one out away from seven no-hit innings.

But, reality set in, and in a brutal way.

Angels catcher Max Stassi stepped up and hit a soft chopper up the middle. Ray reached out for the ball, it hit his glove, but he couldn’t come down with it and Stassi made it to first.

That is a tough way to lose a no-hit bid, and what hurts more is the play should have been called an error.

Yeah, this probably should have been an error. Ray jumped up, it bounced off his glove, and the runner was safe. It isn’t hard to argue that point, either.

MLB fans — and Mariners fans, specifically — were upset about the call.

I don't think a "hometown scorer" is a thing. But yeah, that should have been an error. https://t.co/QecxIii9CY

Rich Eisen might have had the funniest response to the situation.

The consensus is that should have been an error. That hurts.

Robbie Ray got screwed that was an error lol

Boy, that could easily have been ruled an error on Robbie Ray.

That honestly looks like it should be an error on Robbie Ray.

To be 100% honest he should have made that play and therefore I think it should be an error and not a base hit. #SeaUsRise #Mariners @Mariners

So @MLB official scores are as bad as the umpires. They called the error Robbie Ray made…a hit. That's a joke

That might be the absolute worst way to lose a no-hitter.

If there is a silver lining, Ray gave up two hits in the eighth inning but still finished with seven innings and one run in a terrific outing nonetheless.

Unfortunately, the official scorer in Seattle made a huge mistake, and Ray might be replaying that for a long, long time.