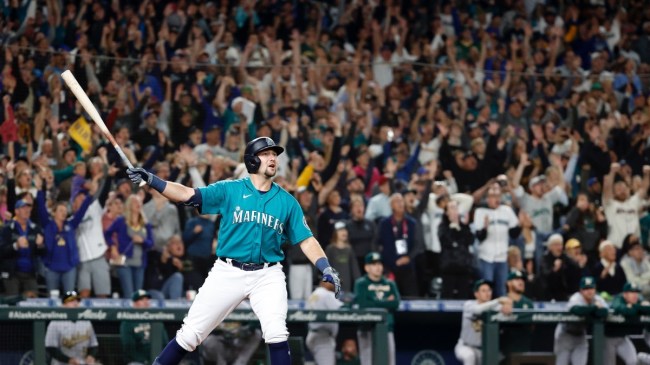 It’s been 20 years of futility for the Seattle Mariners. Following a 116 win campaign in 2001 behind the likes of Ichiro, Bret Boone and Edgar Martinez, they lost in the playoffs to the New York Yankees and haven’t been back since. They got close last year, taking things into October before being eliminated.

This year, expectations were high. They returned a great offense led by Ty France and Eugenio Saurez and added Cy Young Winner Robbie Ray to the team in free agency. Rookie sensation Julio Rodriguez looks like one of the best players in baseball, too. It paid off.

The Mariners clinched a postseason berth in the most dramatic way

With still seven games to play, the Mariners entered Friday Night’s contest against the Athletics needing to win to clinch their spot. And, win they did.

With two outs in the ninth inning in a 1-1 game, pinch-hitter Cal Raleigh came to the plate and had one of the most consequential swings in Seattle history.

THE MARINERS END THEIR POSTSEASON DROUGHT WITH A WALK-OFF HOME RUN. pic.twitter.com/qcDM5JG1xx

What a moment for the young catcher and for all of the M’s fans. Consider that this is what the history of the franchise has looked like in terms of postseason appearances.

THE MARINERS END THEIR POSTSEASON DROUGHT WITH A WALK-OFF HOME RUN. pic.twitter.com/qcDM5JG1xx

20 years is a long time coming, and fans of the ball club are elated.

Known Seattleite Mina Kimes has a pretty comedic response to the end of the playoff drought.

The last time the Mariners were in the playoffs I wore a puka shell necklace to school every day.

The drought could end tomorrow.
How are we supposed to sleep?!

Here’s a great fan reaction to the home run shot from T-Mobile Park, home of the Seattle Mariners.

The moment the #Mariners made it back to the playoffs. 21 years of frustration is over. pic.twitter.com/HAcztIMvqg

Nate Tice, an NFL writer for the Athletic, is a lifelong Mariners fan and he was quite happy.

only sports team I’ve truly ever been attached to. Was there in person for The Double. Whole ‘01 season is ingrained into my brain. Didn’t think it would take this long for another playoff run but oh man this is something

The Mariners ending a 21-year playoff drought on a walk-off homer by a guy named Big Dumper. How can you not be romantic about baseball?

It remains to be seen how well they will fare in the playoffs, but people in Seattle are partying tonight.

The longest streak without a postseason appearance now belongs to the Philadelphia Phillies at 11 years. They themselves are on the verge of breaking their streak.