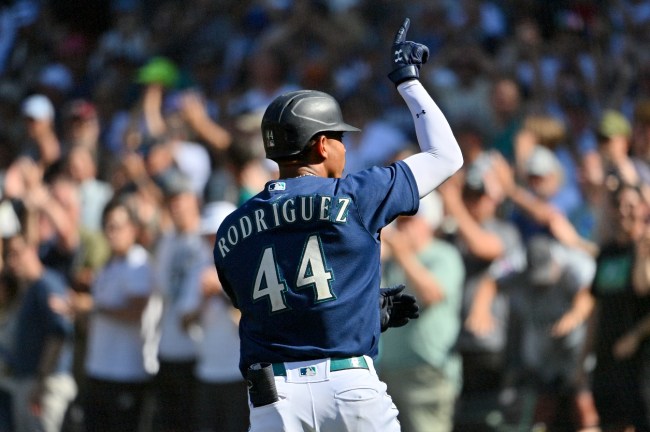 Rookie sensation Julio Rodriguez has only been in the MLB for the 2022 season. Yet, the Seattle Mariners star has made a trip to the MLB All-Star Game and become a fan favorite in the Pacific Northwest. He then put on a show at the Home Run Derby, and the story continued to write itself.

Now, Rodriguez and the Mariners have agreed to a new contract extension to keep him in town for a long time. Here are the details, courtesy of Jeff Passan of ESPN.

Sources say the deal is $210M guaranteed over 14 years with the ability to grow to well over $400M.

So, Rodriguez gets $210 million guaranteed, and he COULD get as much as $400 million over the next 14 years. This is a massive deal for both sides.

Rodriguez gets the bag, and the Mariners keep their young superstar on the roster for the foreseeable future.

Mariners fans were thrilled at this development:

Wow!!! That is awesome news, keep him around for ever! #LFG #SeaUsRise https://t.co/KJjc1iWUkY

Don’t even need to see the numbers. Best deal in baseball.#ballclub https://t.co/TXJPz7M6jv

If Rodriguez continues to perform as he has in 2022, this could be an absolute steal. So far this season, he is batting .269 with 20 home runs and 64 RBIs. We saw Fernando Tatis Jr. get a similar deal at a young age, and while there are plenty of risks, it is hard to ignore the talent of these young superstars.

Julio Rodriguez will be wearing a Mariners uniform for a long time.