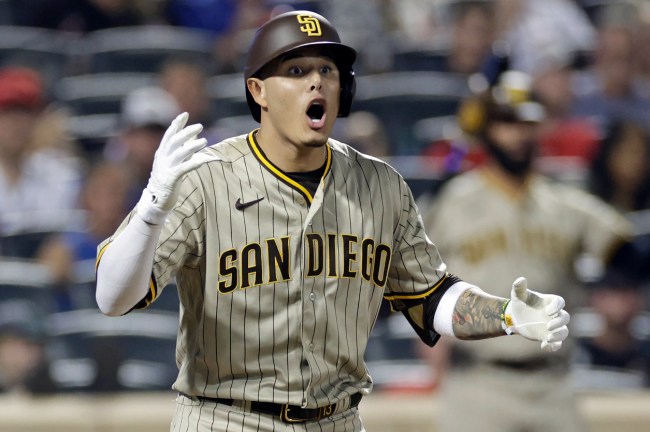 The San Diego Padres were trying to finish a three-game sweep of the New York Mets. Unfortunately, the Mets bats came to life on Sunday night.

But that isn’t the main story of the night. In the top of the sixth inning, with the game scoreless, Manny Machado was hit by a pitch and began to walk to first base.

However, things quickly turned as Angel Hernandez — who was at first base — called Machado out.

Here’s how everything went down.

Manny Machado's mad for being called out but Angel Hernandez was… correct? 😮pic.twitter.com/OTlAcWerli

The pitch hit Machado. There is no doubt about that.

However, he was swinging, and Hernandez called Machado out on the play.

Manny Machado was plunked with an 0-2 changeup trying to check his swing. First-base ump Angel Hernández ruled that Machado went, so instead of a leadoff baserunner, the Padres have one out and nobody on.

Angel Hernandez has had his fair share of terrible calls in his career, and this year has been no different. But we have to side with Hernandez on this one because he appears to have made the correct call.

This confused everybody: Machado, Padres manager Bob Melvin, and those watching.

Machado’s reaction was exactly how you expected.

Manny Machado reacts to Angel Hernandez calling him out on a check swing after being HBP. pic.twitter.com/6qQO2LVZlt

It was a frustrating turn of events, but according to the rules, Hernandez made the right decision. MLB fans were stunned that Hernandez got it right and reacted accordingly.

I hate Hernandez as much as anyone but this one he got right which I hate to admit https://t.co/vHRKrxc18z

Hernandez is trending tonight for this and yeah it seems like he called it right. The bat went over the plate on the swing so it counts. https://t.co/uky1KnswTU

The Mets would also go on to win the game, so Machado’s night did not go well. Oddly enough, Angel Hernandez got a call right.