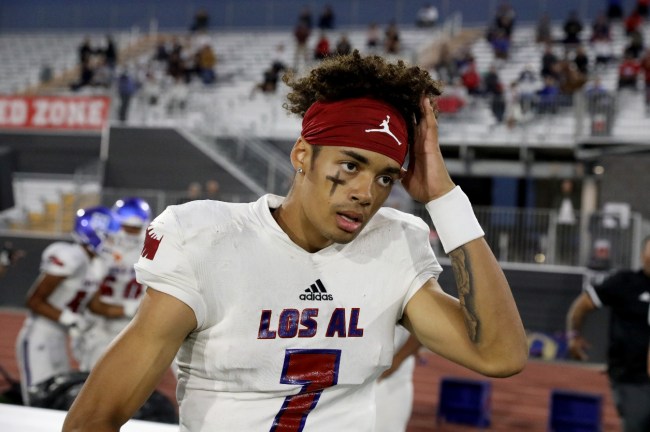 It was just a regular Thursday evening at the end of July. Then, it wasn’t.

The college football world took an interesting turn with a report from Billy Liucci of TexAgs.com. Liucci reported that five-star Class of 2023 QB Malachi Nelson — who is committed to the USC Trojans — appeared in College Station for an unofficial visit with Texas A&M.

Want some late-breaking news on @TexAgs? How about USC commit and Los Alamitos (CA) QB @Malachi arriving in College Station moments ago? The nation's No. 1 overall prospect will take in Aggieland for a surprise UV.

Antonio Morales of The Athletic confirmed the news as well. Morales even mentioned that Lincoln Roley was made aware of this beforehand.

Can confirm that #USC’s five-star QB commit Malachi Nelson is visiting Texas A&M this weekend. A source said Nelson made Lincoln Riley aware of this beforehand, and told some other USC recruits in a group chat. https://t.co/ktoen4VK66

So, there you go. Malachi Nelson, the next superstar to walk the halls of USC, is visiting Texas A&M. Now, with Caleb Williams and his Heisman Trophy candidacy in LA for the next couple of seasons makes sense for Nelson to explore other options.

But, the college football world sure reacted quickly to this massive news.

Lincoln Riley possibly losing a recruit to Texas A&M a tale as old as time. https://t.co/JHw2ghn9GB

The reactions are mixed and nobody knows what comes out of this. Will Nelson change his mind and head to the Aggies? Or is this all a ploy of some sort?

If you haven’t heard of Malachi Nelson, he is easily among the best QBs in the Class of 2023.

5⭐️ USC QB commit Malachi Nelson has one of the brightest futures in all of CFB. pic.twitter.com/3zas2qNGj4

If he decides to head to Texas A&M, Lincoln Riley and the Trojans will need to consider their next QB soon. If not, Aggies fans will be in complete chaos.