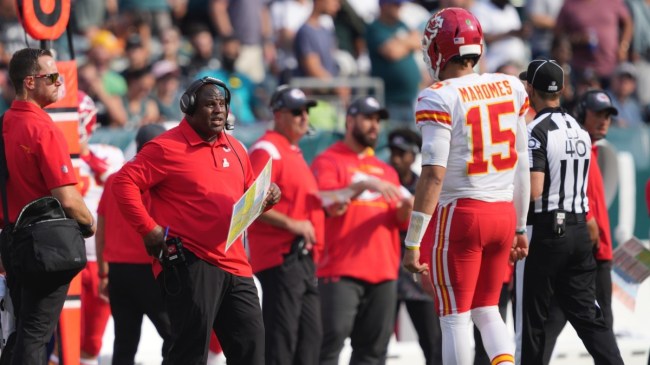 The marriage between Pat Mahomes and Eric Bienemy as the quarterback and offensive coordinator has been fruitful in Kansas City. They’ve won a super bowl and reached another one, plus a few AFC championship game losses.

But, it was an unhappy couple on Sunday as they left to go to the locker room for halftime.

After a half where the Chiefs’ offense didn’t look great and Mahomes had less than 100 yards passing against the Indianapolis Colts the two got into it on the Kansas City sideline.

If nothing else we made Mahomes fight with his OC#Colts#ForTheShoe#ChiefsKingdom#KCvsIND pic.twitter.com/e4Pkeojnz8

It appears the issue was the Chiefs elected to run out the clock at the end of the first half instead of letting Mahomes loose.

The NFL world reacts to the skirmish

Whenever one of the league’s biggest stars and their coordinator get in a fight, it’s going to be big news.

They are indeed not acting appropriately.

I'm sure everyone will react appropriately to Eric Bieniemy and Patrick Mahomes arguing at halftime.

People have questioned why Bienemy couldn’t get a head coaching job given the offenses he’s been a part of. But, rumors have persisted for a while that he and Mahomes don’t get along.

They have been fighting for a while. And I don't think Patrick is the problem.

Needless to say, this story won’t go away for a while.