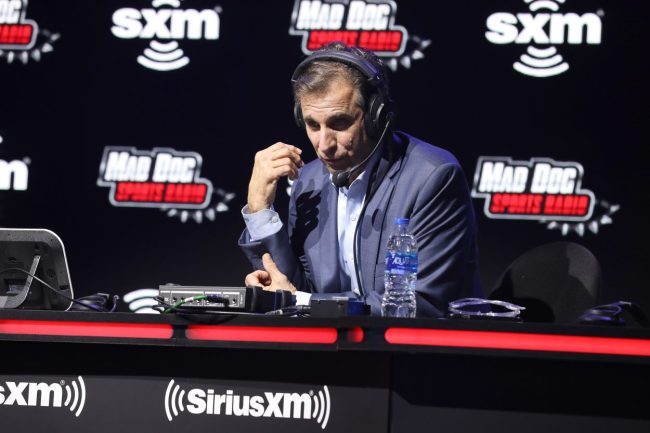 Chris “Mad Dog” Russo is one of if not the biggest name in sports radio today. The longtime New York sports radio host spent years as the co-host of Mike Francesa on the Mike and the Mad Dog show and now he’s taken his talent to ESPN.

Russo was on Wednesday morning’s edition of ESPN First Take alongside Domonique Foxworth. Without Stephen A. Smith, who was absent from the show, Foxworth took it upon himself to go after Mad Dog.

Foxworth and Russo were discussing Donovan Mitchell’s potential trade out of Utah when Russo asked why NBA stars have so much power. That set Foxworth off on an absolutely epic rant.

Foxworth cooking Mad Dog and telling him about it (h/t @Ryan_Cortes) pic.twitter.com/tajPHHAfZK

“I can tell you the differnce,” Foxworth said when Russo asked why he can’t do the same thing with ESPN and other networks. “You’re Chris ‘Mad Dog’ Russo. You have a certain amount of value. You are not no damn Kevin Durant. Your value is not that.”

Russo seemed to take the jab in stride and the two laughed it off. But Foxworth wasn’t done coming after his famous co-star.

“We can’t allow Mad Dog to Euro step around that hypothetical. I know you don’t know what a Euro step is. Because it’s relatively new to the game of basketball, and you only watch stuff from the 90s and before,” Foxworth said.

Foxworth came into the show knowing he was going to go after Russo, and the two leaned all the way into it.

What is the sports opinion that I can use to trigger a rant from Mad Dog today on @FirstTake?

Seems like @MadDogUnleashed brought his b-game today cause @stephenasmith not here. That was a mistake. Hope he’s using this break to get his mind right. pic.twitter.com/1eGwn0NNeD

Wednesday’s show was just a small display of why Russo has been must-listen radio/must-see TV for a number of years. And Foxworth was the absolute perfect protagonist.