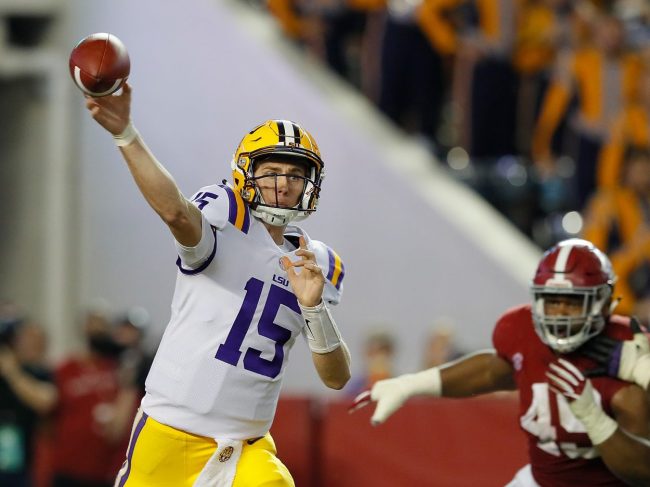 Brian Kelly has been the head coach at LSU for less than a year. And yet the fiery head coach already has Tigers players who are quitting football. At least if reports are to believed.

BREAKING: LSU QB Myles Brennan is walking away from football, a source has told me. Brennan was informed that he will not be the starting Quarterback this fall.

The news came as a shock to many across the college football world. Brennan is a sixth-year quarterback who missed the entirety of the 2021 season while recovering from an injury. In his previous four years with the Tigers, Brennan made 20 appearances including three starts.

All three of Brennan’s starts came in the 2020 season before suffering an injury against Missouri that cost him the rest of the season. The former four-star recruit threw for over 1,100 yards and 11 touchdowns in those games and was the first QB in LSU history to throw for over 300-plus yards in his first three stars.

Brennan was competing for the Tigers’ starting quarterback job alongside Arizona State transfer Jayden Daniels and redshirt freshman Garrett Nussmeier. Nussmeier is the son of former Alabama offensive coordinator and current Dallas Cowboys quarterback coach Doug Nussmeier. He was a four-star recruit in the class of 2021.

Daniels, a senior, is the presumptive starter as of now but Nussmeier is working his way back from an offseason injury as well. LSU fans were clearly taken aback by the news of Brennan’s decision.

Sounds like it’s down to Garrett Nussmeier and Jayden Daniels for QB1 now at LSU. https://t.co/1F0RyFdt7n

Brian Kelly isn’t exactly known as a players coach, so it’s not surprise to see Brennan not having much interest in sticking out with him on the bench.

It turns out the New England Patriots' offensive struggles are a true team effort. https://t.co/K8Nj7elwNc

The Tigers begin their season on Sept. 4 with a marquee matchup when they meet the Florida State Seminoles at Superdome.