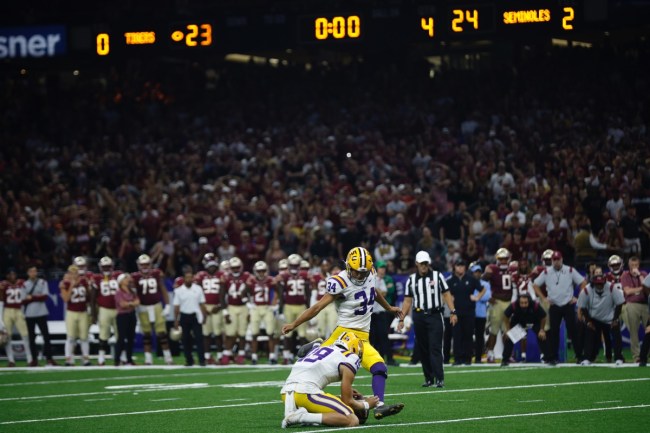 In one of the craziest endings to a football game anyone can remember, LSU overcame a two-touchdown deficit in the final five minutes, and drove 99 yards in 80 seconds to tie the game with no time left on the clock to score what appeared to be the game-tying touchdown.  Instead, Florida State blocked the extra point, sending the college football world into a frenzy and LSU fans into a state of despair.

It was an ending for the ages

After the Seminoles scored on a long drive at the start of the fourth quarter to take a two-touchdown lead, it seemed like it was going to be a straightforward statement win for Mike Norvell’s Florida State program. But, LSU put together a marathon fourteen-play drive to get back within 7 with just over four minutes to go in the game.

Once again, though, it looked the ‘Noles would put it on ice, when they drove down well into LSU territory and faced a 3rd and goal from the LSU 1. What happened next was the start of the craziness in this game.

Still, the Tigers had to go 99 yards in the remaining time. But they drove into Florida State territory. When Mason Taylor appeared to get out of bounds with one second remaining on the clock at the Florida State 2-yard line, it looked like LSU would have one final shot.

But, it was reviewed, and it was deemed that Taylor didn’t get out of bounds, and the clock would start on the whistle to signify ready for play. Florida State called a timeout for some unbeknownst reason. That allowed LSU quarterback Jayden Daniels to survey the defense presnap. He made the most of it, and found Jaray Jenkins in the back of the end zone, sending the Superdome into a state of hysteria.

That set up the blocked kick and gave Florida State a bizarre win over an SEC team in LSU Coach Brian Kelly’s debut.

LSU fans were in disbelief

Those last two plays had fans of both teams experiencing the entire range of emotions.

These pictures were taken about 1 minute from each other. I love college football so much 😂 #LSU #FSU #collegefootball pic.twitter.com/rvBZbqDPxL

@LSUBarstools summed up the feeling for most of Tiger nation.

@ChieffKeiff on twitter may have gone a little overboard in asking head coach Brian Kelly to remove entire units of his football team.

Spencer Hall from Every Day Should Be Saturday summed up the Tiger anger perfectly.

It’s certainly not the start that Brian Kelly’s Tigers wanted this season, and Kelly himself has now lost his first game as LSU coach. It remains to be seen if LSU can rebound from this during the brutal schedule it will face in 2022.