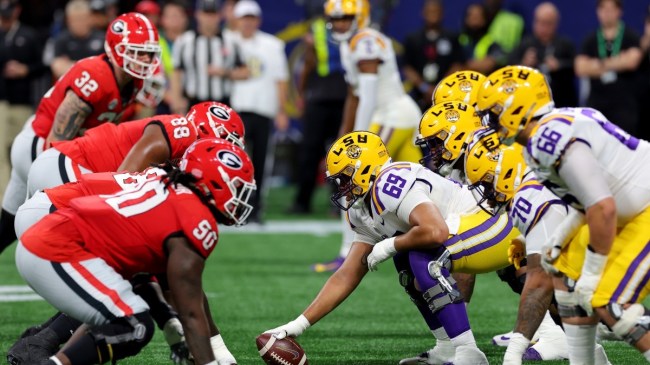 LSU has had a nice season under first-year head coach Brian Kelly. After a terrible loss to Florida State week one, they got much better. They lost to Tennessee but beat Alabama to give them the leg up in the SEC West. They took a bad loss against a bad Texas A&M team last week, but the Tigers still advanced to play Georgia in the SEC title game.

And, early on in the SEC title game, they made a terrible mistake that people will laugh about forever.

Late in the first quarter, the Tigers lined up for a field goal in a 0-0 game. What happened next shocked everyone.

Georgia blocks the FG, LSU thought the play was over, Georgia scoops it up and takes it 95 yards to the house!! 😂😂😂😂😂 pic.twitter.com/AW1fa5MJ9E

Wow. What a mistake. Clearly, that’s a live ball. Credit to Georgia for selling it so well, though. But still, I can’t believe I saw a mistake like this out of a Brian Kelly-coached team.

As a certified Special Teams Sicko myself, this is beautiful.

That's one of the most humiliating defense runback TDs I've seen this year.
LSU going to be crushed this afternoon. #lsuvsgeorgia

It was a precursor to a bad half for LSU, as they trailed 35-10 after the 2nd quarter. A win would send them to the Sugar Bowl.