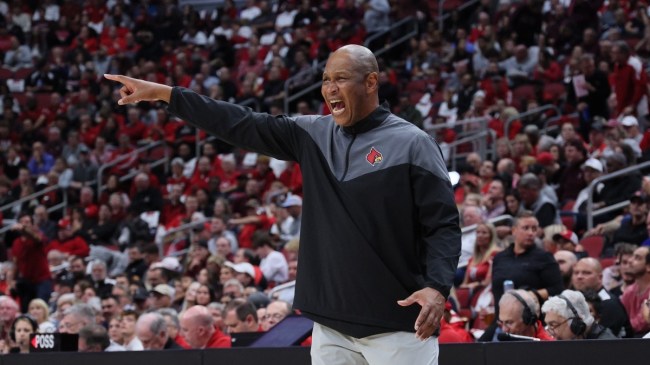 The Kenny Payne era has been full of excitement for the Louisville Cardinals basketball program so far. The Louisville grad and former Kentucky and New York Knicks assistant coach has injected some energy into a program that fell on hard times in the Chris Mack era. Though he failed to land Emoni Bates, he’s already recruited two top-100 players for the 2023 class, and they’re in the mix for a few more. Things are looking up in Louisville as they look to get back to the championship-level program they were under Rick Pitino.

But, you actually have to win basketball games. Louisville opened its season Wednesday night by welcoming the crosstown program, Bellarmine. Bellarmine is only playing its 3rd season of Division I basketball, and they were a longtime D2 power. Still, Louisville should be able to handle a school in its own city that has less than 4000 undergrads and no one but the most hardcore college basketball fans have heard of. Bellarmine won the Atlantic Sun conference tournament last year, but was ineligible to compete in the big dance due to NCAA rules regarding when programs can compete after moving divisions. Still, the Cardinals should be able to handle them. Well, the Knights of Bellarmine had a different idea.

the Knights blitzed the Cardinals in the first half and took a 41-30 lead into halftime behind some really pretty execution on offense.

Louisville slowed down the Bellarmine offense in the 2nd half, though. And, they had the ball and a chance to win with just seconds left. Here’s what happened.

Bellarmine clinches the game with an overhead heave to the opposite end of the court. pic.twitter.com/aC2wBR0k9X

Wow. What a heads-up play by Providence transfer Juston Betts. Yes, there was still a little time left on the clock, but it made Louisville have to make a shot from beyond halfcourt to win. Normally you’d want to get fouled there, but being up only one makes it a smart play, as even if you knock down two foul shots, Louisville is going to have four or so seconds to get the ball upcourt for a great look.

But, what a win for the Knights, and what a bad loss for Kenny Payne and Louisville to start the Payne era.

Louisville actually fought hard to get back in this game late.