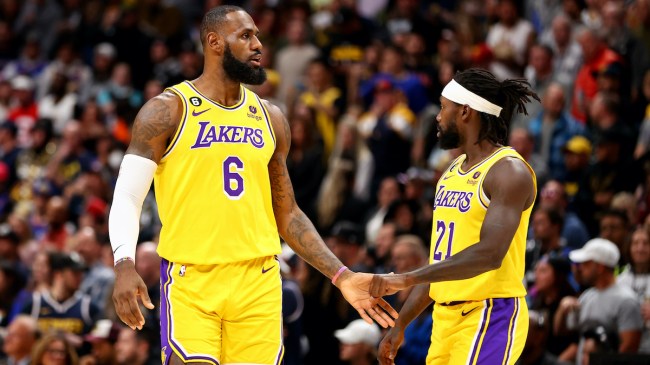 Four games into the 2022-23 NBA season and the Los Angeles Lakers are still winless.

After a disappointing end to the 2021-22 season with a first-round exit in the playoffs, the Lakers were hoping to bounce back this year. It hasn’t exactly happened so far with three straight losses to the Golden State Warriors, Los Angeles Clippers, and Portland Trailblazers.

Things didn’t get any better against the Denver Nuggets on Wednesday night. After crumbling in the second half, the Lakers lost 99-110 and fell to 0-4 on the season.

The Los Angeles Lakers are 0-4 to start to the season.

With superstar talents like LeBron James, Anthony Davis, and Russell Westbrook on the roster, fans expected better from the Lakers. The team added Patrick Beverley and Dennis Schröder in the off-season, but things haven’t clicked.

While it’s still early in the season, it’s certainly not a great sign. The last time the Lakers started 0-4 was in the 2015-16 season. They finished with the second-worst record in the entire league that year.

Even LeBron hasn’t had such a poor start since his rookie season back in 2003-04.

LeBron is 0-4 for the first time since his rookie season. pic.twitter.com/6OxoqrWDsz

With the Lakers winless after four games, NBA fans didn’t hold back with their jokes or criticism. It’s plain and simple, the Lakers are bad right now.

In particular, the Lakers’ 3-point shooting is bad. According to ESPN Stats & Info, their current 22.3% 3-pt field goal percentage is the worst over any 4-game span by any team within a season in NBA history.

Lakers fans after they make a 3 pic.twitter.com/mJapLPanuv

It gets even funnier when learning that the Lakers shot 8-for-30 from the arc on Wednesday, which actually improved their 3-pt percentage on the season.

With Westbrook out due to a hamstring injury, Lakers fans were left without their usual target to blame for the loss and NBA Twitter made sure to poke fun at that. With or without him, the Lakers just can’t win.

And then the Lakers said, I was the problem…🤣🤣 pic.twitter.com/WKVe72z6fN

Some call it bad basketball, others call it “peak entertainment.”

People keep saying the Lakers have too many national television games, but I personally think they should have more.

This is peak entertainment.

Some are also already convinced about how this season ends for the Lakers. Hint: it doesn’t include a playoff appearance.

The Lakers will have an opportunity to turn their season around against the Minnesota Timberwolves on Friday.

But if they fall to 0-5, who knows how ruthless fans will be?