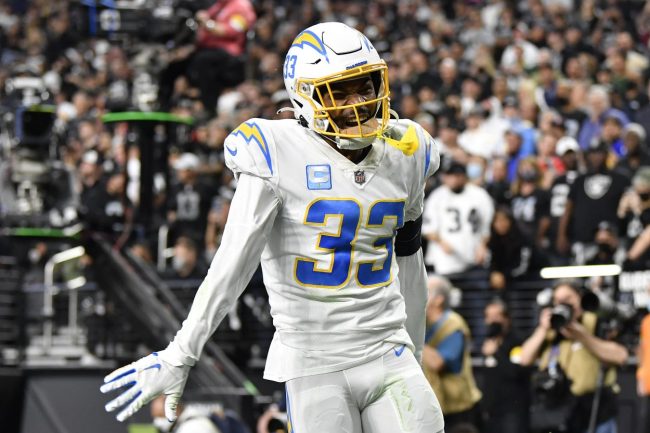 Minkah Fitzpatrick’s record-setting contract with the Pittsburgh Steelers lasted all of two months. The two-time Pro Bowler signed a four-year, $73.6 deal back in June. But that contract has now been surpassed by the Los Angeles Chargers and superstar safety Derwin James.

Derwin James and the Chargers have agreed on a massive 4-year $76.4M extension, which averages $19.133M a year and resets the safety market. This deal makes James the highest paid safety in NFL history, per source.

The Charges and James came to terms on a four-year, $76.4 million extension that set a record for the highest-paid safety in league history. The deal also breaks two other records. James will receive $29 million in the first year of his deal as well as $42 million overall guaranteed. That tops the $36 million guaranteed that the Steelers are set to give Fitzpatrick.

James had previously held out of Chargers’ training camp in order to gain leverage in contract talks. Despite hot takes by some calling him one of the league’s most-overrated players, the Florida State product has been huge productive for Los Angeles.

The Chargers selected James with the 17th overall pick in the 2018 NFL Draft. Since then he’s racked up 257 tackles, five interceptions and three forced fumbles in 36 games played. The issue for James, however, has been health. He played in just 36 of 55 potential regular season games since being drafted and dealt with a variety of injuries in that time.

Though no one doubts James’ ability to change games when he’s on the field. Chargers fans are elated about locking down their superstar.

Beautiful news to wake up to! Gonna be a great day! Derwin got his bag!! https://t.co/z5jYAPQVfy

This is how I’m walking my kids to school after the news broke! LFG! https://t.co/sQCcgpqaJ3

James leads a Chargers team that has the sixth-best Super Bowl odds at +1400 according to DraftKings Sportsbook.

Aaron Rodgers is truly one of a kind. 😂https://t.co/A2A7mdTWeF

Should he stay health, those odds may end up looking entirely too long when we look back in six months.