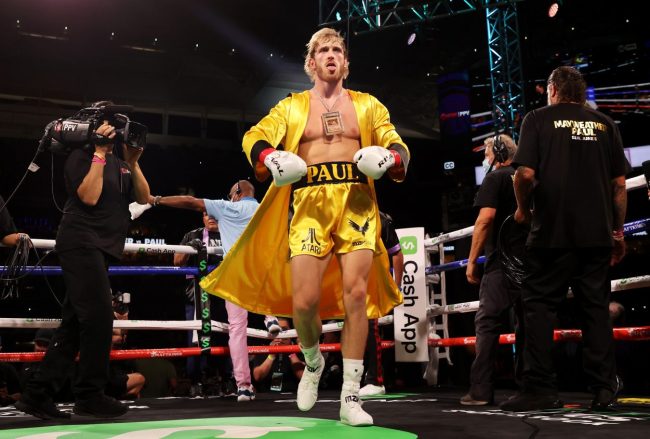 Logan Paul must have been feeling a little bit left out.

Younger brother Jake has been in the news left and right of let. Whether it’s challenging UFC fighter Nate Diaz or feuding with boxer Tommy Fury, Jake Paul’s name has been everywhere.

The elder Paul brother made headline news this week when he announced he’d signed a contract with pro wrestling giant WWE.

Just signed with the @WWE pic.twitter.com/7lYdxIKivF

I think it’s safe to say @LoganPaul shocked the world with his abilities as a guest at #WrestleMania … just imagine what he’ll do as a @WWE Superstar. Congratulations and welcome! https://t.co/GyTMAzBIau

Paul made his debut in pro wrestling back in April when he teamed with WWE superstar The Miz at WrestleMania 38 to take on Rey Mysterio and his son Dominik.

Wrestling fans were wary of Paul, but he absolutely crushed all expectations in his in-ring debut.

In a match with four people at WrestleMania, Logan Paul was better than everyone not named Rey Mysterio.

After Logan Paul's WrestleMania showing, that's objectively a huge get for WWE. Even if he does one or two matches a year, he's a big name to have on the show.

Logan Paul signing a multi year deal with WWE is a great move.

He was one of the highlights of Wrestlemania, and if they keep him in a position where he is an attraction, and less of him taking a prime spot away from someone who actually deserves it, I don’t mind it

I think people forget how good Logan Paul was at WrestleMania. #WWE

At 27 years old, Paul is considered young for a pro wrestler and his athleticism is evident. The contract is likely for a limited amount of matches. But Paul could be an absolute superstar in the ring if he chose to be.

The young superstar has the athleticism, charisma and understanding of the industry. And there’s no doubt both Paul brothers know how to work a crowd.

If you think Logan Paul signing with WWE is a bad move, you're a bad businessman.

I honestly love this, he’s been amazing in WWE https://t.co/vYg6BuwgOB

I'm on board with Logan Paul signing with WWE. At 'Mania he proved he's not only a natural but also invested in what he's doing too. I can't believe I'm tweeting this but there we go

Walks around with a Pokémon card on a chain and draws power from it like Undertaker and the urn ⚱️ #SmackDown https://t.co/4jlrYc872j

Paul is undeniably a huge star. And what the WWE needs right now is huge stars.