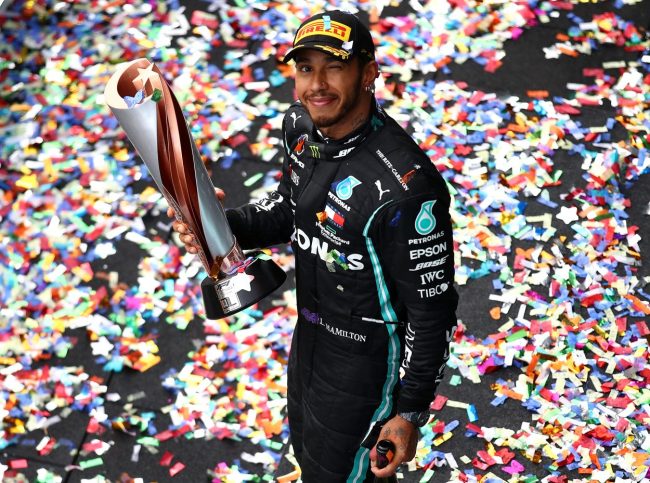 Lewis Hamilton is many things. He’s a seven-time Formula 1 World Drivers Champion. He’s officially a knight according to British rule. He is a Time Magazine cover boy. And he’s a cultural icon.

Now, Hamilton can add one more thing to that list. As of Tuesday morning, Hamilton is official an NFL team owner.

“We're delighted to welcome Seven-Time Formula One World Champion Sir @LewisHamilton to our ownership group. He is a champion competitor who knows what it takes to lead a winning team.”

Statement from Rob Walton on behalf of the Walton-Penner Family Ownership Group: pic.twitter.com/kl2z04lKyk

The Walton-Penner family purchased the Denver Broncos for an eye-watering amount of money. Now it appears they’re divvying up shares of the team. Starbucks chairwoman Mellody Hobson was an initial investor. Condoleeza Rice was named a minority owner in early July, and now Hamilton has joined the fray.

Rob Walton released the following statement on the Hamilton news:

“We’re delighted to welcome Seven-Time Formula One World Champion Sir Lewis Hamilton to our ownership group. He is a champion competitor who knows what it takes to lead a winning team and fierce advocate for global equality, including in his own sport. With over 100 race wins, Lewis is considered the most success F1 driver of all time. His resilient spirit and standard of excellence will be an asset to the ownership group and the Broncos organization.”

While Hamilton did not release a statement, he did take to Twitter to amplify the announcement.

The ownership model is not anything particularly new. But Broncos fans didn’t all love the idea of adding Hamilton to the fold.

Seriously, other than his money what does he know about football??? Maybe see if Tiger Woods is interested in owning a football team.

So they buy the team then sell off pieces to anyone who can afford it? I may be in the minority but I’m not a fan of this. Starting to have too many cooks in the kitchen.

🤯 Money talks. What a waste of resources.

Though most fans seemed excited to add the racing legend to the fold.

The Broncos get a world class athlete and one of the kindest people on the planet added to their ownership. Massive win https://t.co/aENs9ZC5q4

Gonna tell my kids this ownership group was The Avengers. https://t.co/dVUCF2kN15

As unlikely owners of NFL teams go, this one may just take the cake.