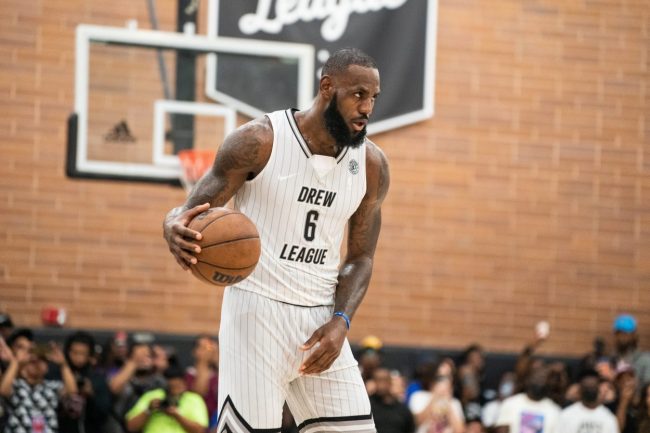 Apparently LeBron James has been doing a lot more in recent days than just enjoying being a dad. James made headlines this week over tweets regarding his sons, Bryce and Bronny. Particular over the Bronny’s future as new broke that the eldest James son may be headed to Oregon to play college basketball.

He hasn’t taken 1 visit yet and has only had a few calls with coaches and universities. When Bronny makes his choice you’ll hear it from him. #JamesGang👑 https://t.co/BBciKxl7m8

But the focus shifted more toward the four-time NBA MVP on Wednesday afternoon as ESPN’s Adrian Wojnarowski broke the news that James has agreed to a gargantuan two-year, $97.1 million extension with the Los Angeles Lakers.

The superstar was set to enter the final year of his deal in LA in the 2022-23 season and there had been rumors that he could look elsewhere if the Lakers didn’t improve.

James and Los Angeles are in the process of trying to land superstar Kyrie Irving from the Brooklyn Nets according to recent reports. Though fellow star Russell Westbrook has reportedly held that deal up.

Injuries hampered James significantly in 2021-22. He played just 56 games as the Lakers missed the NBA playoffs. Though he was remarkably effective when he did play. James averaged 30.3 points, 8.2 rebounds and 6.2 assists over those 56 games.

Fans were a bit surprised that both he, and the Lakers, committed to the deal so soon.

I get it and all but like…. Why?
I hope by then we can at least make the play in and AD will play more than half a season under this nice big contract he’s in. 🙃 https://t.co/X6KYNsGdCI pic.twitter.com/Y3KUzFbPnr

James has been adamant about playing alongside his son Bronny, who will be eligible for the 2024 NBA Draft. That made fans take note of one specific part of his new deal.

That player option officially makes 2024 the race for Bronny https://t.co/JFOjrrnENa

Bronny will be draft eligible in the 2024 draft, so father and son can still relatively easily align that year. https://t.co/mmLXsdaKTx

The last NBA seasons have not been kind to the Los Angeles Lakers.

How many rings would Kobe and Dirk have won?https://t.co/U20ta7vnrW

But locking down perhaps the greatest player of all-time has to be considered a big win.