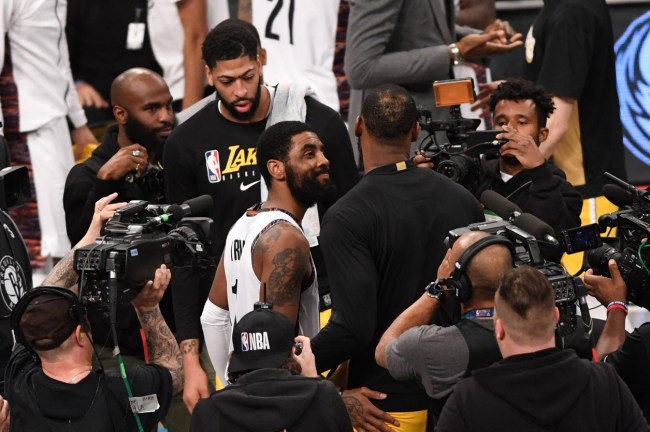 Up until now, Brooklyn Nets star Kyrie Irving has not been traded. Kevin Durant has also not been traded, and the entire NBA is waiting patiently to see what happens on that end.

The Los Angeles Lakers are the lead horse in the Kyrie blockbuster, and it seems to be only a matter of time before he heads west.

Every day provides us with new updates. But Tuesday night sent everybody into a frenzy after some cryptic activity by LeBron James and Kyrie Irving on social media.

This is definitely something. Or maybe it’s just a major coincidence, and Handy wanted to get everybody wound up? Doubtful.

For what it’s worth, that has been LeBron’s Twitter location for quite a while. But Handy’s comment is something to think about.

The latest reports stated that the Lakers are hesitant to include a second first-rounder in a Kyrie trade. But nobody else has been calling Brooklyn, and everybody knows he wants to play with LeBron again.

It is only a matter of time before this happens. Something has to be brewing. Maybe LeBron James and Kyrie Irving will join together soon.