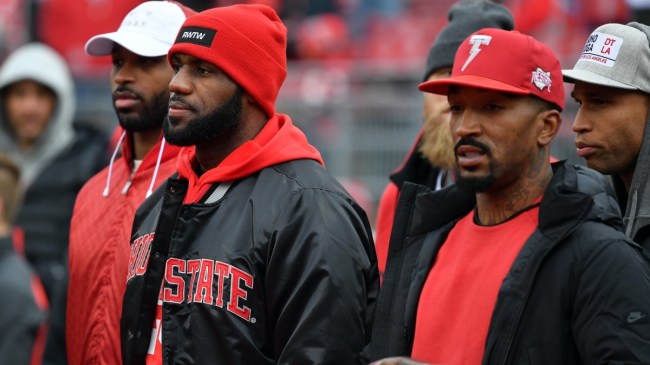 It’s pretty well-known that Lebron James was a great high school football player. James didn’t play past his junior year, but his 6’8 220lb frame in high school must have objectively been terrifying to go along with his plus athleticism. He finished his High School career with just under 2000 yards and 27 touchdowns to go along with two all-state selection.

Of course, Lebron has famously flirted with football a few times since then. No one but Lebron can know for sure if those were genuine flirtations or just a PR stunt, but he did report that he got NFL contract offers during the 2011 lockout

But, could there still be football ahead of him?

Do I have college eligibility if I went to play another sport besides basketball? How does that rule work?

First off, could you imagine the media circus that would be? This is almost certainly not going to happen. But what if it did? What if a 40-year-old Lebron decides to suit up for the Ohio State Buckeyes? I seriously cannot think of anything in American sports that would move the needle like that.

As for the eligibility question, JR Smith is playing college golf at North Carolina A&T this year. So, you’d have to assume James would have eligibility to play college football. But, I do not claim to be an expert on the NCAA rulebook.

In the meantime, Lebron will suit up for his 20th NBA season this year. Kareem Abdul Jabaar’s all-time scoring record is well within his reach, and if he stays healthy he is a lock to get it.