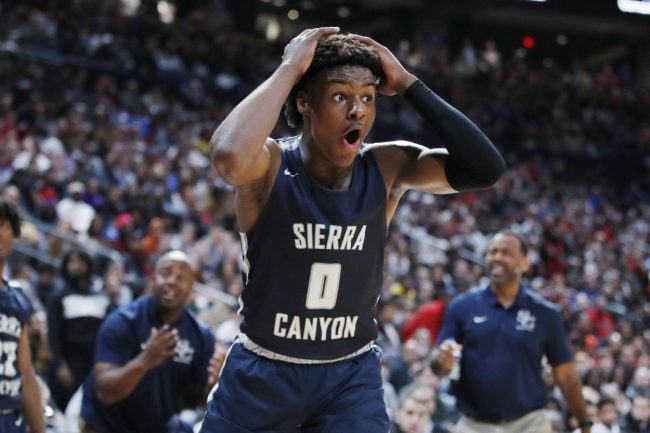 Despite his struggles to stay healthy and the struggles of the Los Angeles Lakers the last two years, LeBron James seems to be loving life these days. Part of that is because the father of three seems to absolutely love being a dad.

Just recently, James reflected on the opportunity to see his two sons, Bryce and Bronny, take the court together in-game for the first time. The duo teamed up as part of an international series of games for the California Basketball Club travel team. Unfortunately, the team lost to the team lost to Hoopsfix Elite from London.

But that was just one game on the tour.

California Basketball Club and the James’ brothers were back at it again on Monday against the U18 French national team and Bronny didn’t miss an opportunity to put on a show.

The eldest James child took the ball on a fast break, hit a ridiculous hesitation move and dropped an absolute hammer of a dunk right on the poor defender’s head.

LeBron couldn’t contain his excitement over the moment.

Those sorts of highlight plays have become commonplace for Bronny James. The 6-foot-3 shooting guard is the 49th-ranked player in the class of 2023 according to 247Sports.

Slowly but surely, Bronny James is starting to come into his own as a player on a loaded Sierra Canyon team. James’ 6-foot-3 frame has filled out nicely and he’s added some pop on drives to the rim through traffic or in transition. One of his strengths is his ability to make catch and shoot jump shots and he is a fantastic passer. James gives good effort on the defensive end where he plays with toughness and versatility. There are times where he can be a bit passive on the offensive end, but overall he has made positive strides as a junior. – Eric Bossi, 247Sports

Tell us how y'all really feel. https://t.co/QFnPWHqbVm

James is not currently committed to any school and experts have struggled to get a handle on his recruitment. Once is sure. Whoever does sign him is getting one heck of an athlete.