Latest Fernando Tatis Jr. Update Has Padres Fans In Complete Shambles Despite Being In First Place 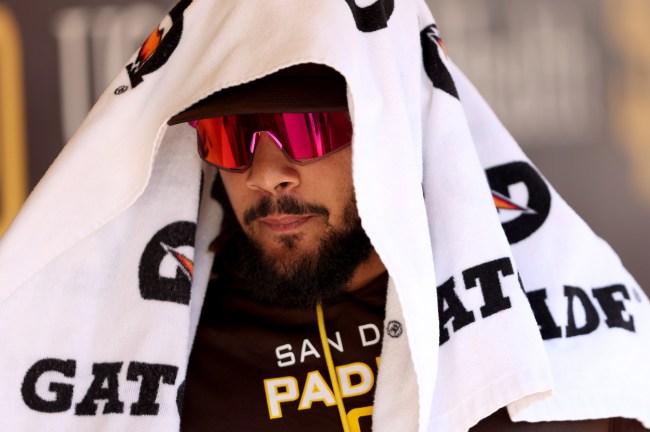 The San Diego Padres got into a tie for first place in the National League West after defeating the Chicago Cubs on Monday night. Somehow, the Padres are staying afloat in the tough NL West and are doing all of this without their superstar shortstop Fernando Tatis Jr.

After injuring his wrist in a motorcycle accident in the offseason, Tatis missed Opening Day and has been working his way back ever since.

But, just when it looked like things were coming along for Tatis, bad news came.

Is Tatis ever coming back this season? Who knows.

Fernando Tatis Jr.’s CT scan yesterday did not reveal the level of healing the Padres hoped. The timeline will be moved back.

As such, Padres fans and MLB fans reacted in complete chaos, especially because there is no clear timeline for Tatis to return to the field.

Come the fuck on. https://t.co/VK8gG3pivh

It is quite remarkable that on June 14 the Padres are tied with the Dodgers in the NL West not having Fernando Tatis play one game.

But this is a big bummer that his return will be pushed back. Such a shame for San Diego. https://t.co/Yw7drNCPFq

Insert emoji drinking scotch, telling other emojis about how much fun Tatis is and why him healthy is better for the game, then belch-sobbing https://t.co/2HxX6JiEWc

Plain and simple, this is terrible news, and not just for the Padres. When Tatis is on the field, the MLB is even better to watch, and he is arguably one of the biggest faces in the game today.

The Padres were hoping for a return sooner than later, and at this point, there might be a chance that he doesn’t return at all in the 2022 MLB season. Yet, somehow, the Padres are hanging around in the NL West.

The question is, can they hang around long enough even if Tatis misses another few months? Of course, general manager AJ Preller is not shy to make a blockbuster deal, so perhaps reinforcements are headed to America’s Finest City sooner than later.