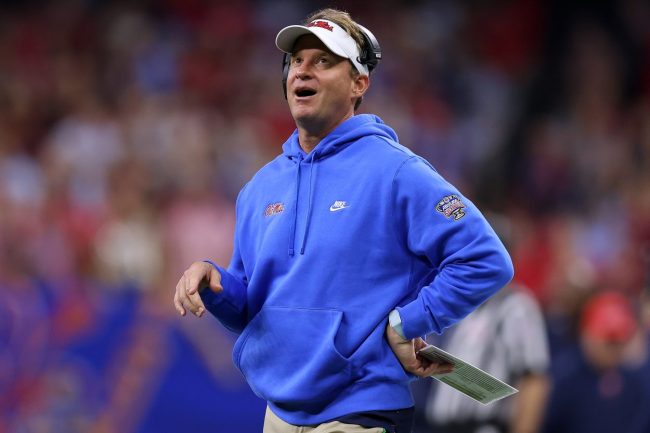 Lane Kiffin is the gift that keeps giving when it comes to memorable quotes and sound bites. That was no different when it came to Monday’s SEC Media Day.

Kiffin was in absolutely fantastic form when he took to the podium. First, he asked the question that every man has probably asked at least once in his life.

Lane Kiffin: "Why do we even wear a tie? Because it was done before?"

A question that has actually been thoroughly answered recently.

Then Kiffin addressed a question regarding the absolutely mayhem that occurred last season between Ole Miss and Tennessee.

"Yes, I have signed a lot of mustard bottles and golf balls. It's been a weird offseason."

But Kiffin saved his absolute best line for a question regarding conference realignment. The Ole Miss Rebels coach was asked about the transition for UCLA and USC to the Big Ten as well as Oklahoma and Texas to the SEC. In typical Kiffin fashion, he didn’t hold back.

Lane Kiffin on USC/UCLA to Big Ten & OU/Texas to SEC: "I don't know if it's a huge jump to the Big Ten, but going to the SEC is a whole nother animal. It's a whole different world."

Just an absolutely brutal burn there that the Big Ten probably won’t be happy about. But it should come as no surprise. Not only is Kiffin all-in as an SEC guy these days, he’s also got plenty of bad blood from his time with the Trojans. That’s something that he seems to have in common with former Trojans and current Rebels quarterback Jaxson Dart.

Fans immediately jumped on the Kiffin comment. SEC fans loved to see the jab, while Big Ten fans were a bit less amused.

There’s objectively a smaller gap between the talent of Oklahoma to Alabama than USC to Ohio State and it’s not close.

Is the SEC harder than the Big Ten? Yes. Is the jump from Pac-12 to Big Ten small? Absolutely not. https://t.co/0bq6Ej1hAa

This guy is so clueless. https://t.co/a5aXJ9wcEy

But mostly, college football fans were just happy to have Lane back to doing Lane things.

I want to hate Lane Kiffin so bad. I really really do. But I just can’t. It’s impossible for me to hate him 🤣

College football is the greatest sport in the world for a number of reasons, and Lane Kiffin behind a mic is definitely one of them.