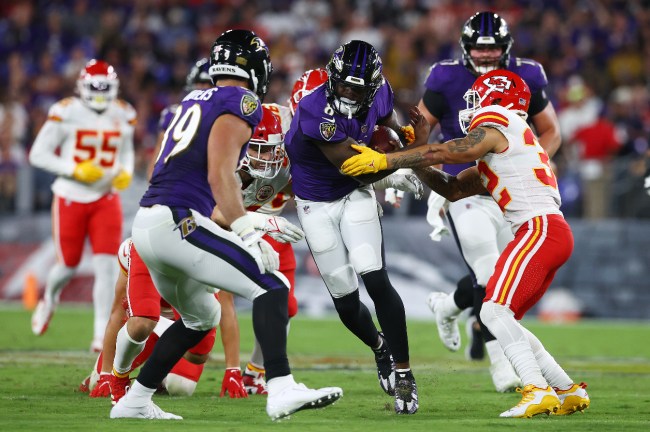 Baltimore Ravens quarterback Lamar Jackson has quietly sat back and watched a ton of players get paid this offseason, including Arizona Cardinals QB Kyler Murray.

Now, Jackson is just waiting his turn to cash in on a massive contract. For now, it won’t happen. But, we all know he is worth every penny of it.

“I think anytime he has the football in his hands, he is the most dangerous person in the world.”

Mathieu certainly has a point: Jackson is mega-talented. Yet, the Ravens haven’t paid him, although talks have circulated since Murray’s record deal.

Jackson can do it all, and he has two 1,000-yard rushing seasons in his career. The question is, is he worth a massive contract?

Here is every Lamar Jackson rushing touchdown in the NFL in two minutes.

The Ravens traded away Hollywood Brown, but they still have tight end Mark Andrews and running back JK Dobbins, who looks to be healthy once again.

If Jackson can put together another strong campaign, he could end up surpassing Kyler Murray’s new deal by next offseason. This praise from Tyrann Mathieu isn’t too far off, either, and let’s see what Jackson has in store in 2022.