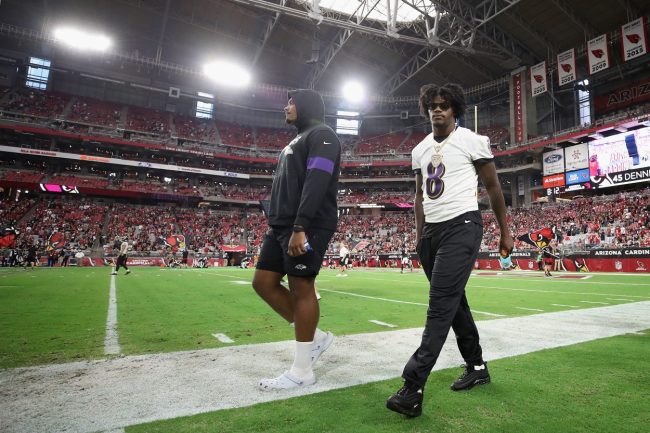 The clock is ticking for the Baltimore Ravens to get a new deal done with superstar QB Lamar Jackson. Technically speak, Baltimore has through the end of the 2022 season before Jackson hits free agency. But Jackson has made it very clear that he intends to shut down contract talks before the beginning of the regular season.

The 2019 NFL MVP has also made it clear what he wants from the new deal, which is reportedly more than the massive five-year, $230.5 million deal Kyler Murray signed with the Arizona Cardinals this summer.

Now it appears that the Ravens are more than happy to make that deal happen.

Cody Benjamin of CBS Sports reports that Baltimore has already offered Jackson more than the Murray deal. But that may not be enough. Jay Glazer of Fox Sports gave his thoughts on the deal prior to the Ravens’ preseason game with Murray’s Cardinals. Glazer said that he believes Jackson wants a fully guaranteed deal similar to Deshaun Watson with the Cleveland Browns, and that it could hold the deal up.

Glazer says it's an uphill battle for Lamar to get an extension soon. The Ravens have offered more than Kyler, but he thinks Lamar wants a fully GTD contract and the Ravens won't offer that pic.twitter.com/Lc4UiPh0z6

“It’s a really big uphill battle here,” Glazer said. “The reason why is because Lamar Jackson … is representing himself. … (The) Deshaun Watson deal kind of throws things out of whack, because I’m sure (Jackson) wants a fully guaranteed contract, (and) I don’t see (the Ravens) wanting to do that.”

The Ravens and Jackson are now just under three weeks from the beginning of the regular season. The consensus belief is that a deal gets done. But if it does not, Jackson may have the largest bidding war in the history of the league next offseason.