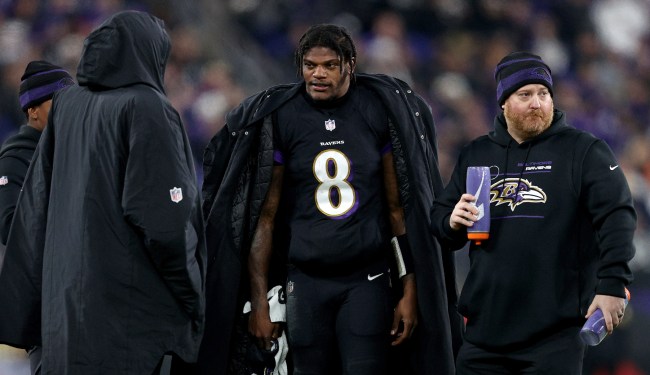 The Baltimore Ravens kicked off voluntary OTAs without their star quarterback. With Lamar Jackson entering the final year of his contract, questions remained about whether or not he would participate in OTAs or training camp.

He was absent from voluntary OTAs this week, although many expected he would do so. His social media activity suggests he plans on attending mandatory camps, although people still were quick to panic about Jackson’s whereabouts.

Former NFL QB Chris Simms was not thrilled with Jackson’s absence and blasted him while comparing him to Tom Brady.

.@CSimmsQB on Lamar Jackson, who once said he wants to be the Tom Brady of his era:

"Brady wouldn't be missing OTAs in year four of his career. … Brady didn't miss an OTA until he had played in four Super Bowls…"

Simms and Mike Florio discussed what this meant for Jackson and the Ravens, and Simms was clearly not thrilled with the decision.

Jackson saw Simms’ comments and was quick to respond to them.

Lamar wants to be Lamar Chris. This part of OTAs is Voluntary my Guy I will be there, just not on your watch it’s probably other QBs not attending Voluntary OTAs either but since it’s Lamar it’s a huge deal. Find something else to talk about🙄 https://t.co/2Nx2b767bb

Jackson has appeared to silence all the discussion with a few simple words: “I will be there.”

Hopefully, he will be, and head coach John Harbaugh refused to give any insight into Jackson’s reasoning for skipping the voluntary OTA sessions.

Let’s remember one thing: Reports have come out repeatedly that Jackson wants to wait until after the season to have contract discussions, so holding out now would be a bit odd.

The Ravens are expecting to have a strong bounceback season, although Jackson will have to do so without Marquise Brown, who was traded on draft night to the Arizona Cardinals.

Lamar watch is on.